But what happens after those wild, untrammeled, get-'em-any-way-you-can words have been corralled and counted? 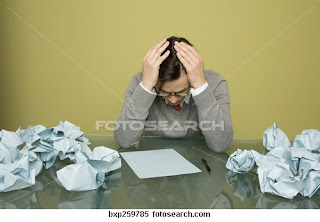 Makes my blood run cold just to think about it. "Edit" really is a four-letter word in more than just the obvious way, isn't it? And like many other necessary skills (how to put up with people I don't like, for example...), it's one I didn't learn properly in school.

A bit of personal history: I was one of those annoying kids who BSed their way through everything, cutting classes I felt I already knew the material for, never studying, and scribbling down homework due in 3rd period while pretending to take notes in 2nd (made possible by the fact that I am old enough to have served my sentence before typing everything became a requirement). On one memorable occasion, I quite literally wrote a poem for a creative writing class on a spare piece of notebook paper held against my friend's back while we rode the (very slow) elevator to our classroom; the teacher, of whom I don't have a very high opinion despite the fact that she thought everything I wrote was brilliant (which is mostly why I don't have a very high opinion of her), praised the hell out of it in front of the whole class, most of whom had witnessed its hasty composition.

By now I'm sure you see where I'm going with this - I never took the time (nor felt much need) to edit anything, and never really got the point of it. To my school-age self, editing was simply double-checking to make sure there weren't any spelling errors (no, not typos, I wasn't typing! ;-) ) or grammatical missteps lurking among the lines. Sometimes I might swap out a word or two if I thought of a better one, or toss in a bit of topical toadying, but the whole crossing-out-and-changing-and-reshaping bit? Clearly, that was for lesser mortals.

Okay, fast-forward. I wrote a whole freakin' book! (Yes, in 30 days - you knew I had to work back 'round to the whole NaNo thing...) I thought it was great, and was inordinately pleased with myself. Who says everybody's 30-day novels are crap? (well, Chris Baty, actually, but...) Mine was darn good, actually, and - let me just sit back and read it and enjoy. Hey, what the - damn, I forgot to reintroduce that package, where did I... Oh, wait, who's this - whoops, wrong name, and... This part is boring, what the hell was I thinking, who wants to read about ghost griffins, why don't I... Crap. This thing needs editing. Big time.

And not my usual add-comma, correct-hyphen, fix-tense-error kind of editing, but some serious rewriting. Which is when I discovered that I really needed to separate the two kinds of clean-up or I was never going to get anything done. It's a macro vs. micro issue, I suppose, but for whatever reason I can nitpick grammar and police punctuation all day, but when it comes to actual replotting or inserting missing information or deleting large swathes of useless drivel - I think I'd rather bathe my cat (the one who doesn't like water).

Five years after so-called "completion", I've managed to tidy up 9 chapters of that thing. Haven't touched it in over a year. Meanwhile, that crazy Tart just keeps cranking out tale after tale and manages to clean 'em up! (No, my eyes are usually this green, at least around the outside...) I'm starting to wonder if there's a window to learn skills like studying and editing, and I've missed it and that's why I'm so lousy at it.

I have a difficult time with re-writing too. I just cannot put down the "teacher" long enough to actually rewrite a particular scene or dialogue between characters. I often start looking for the little things like spelling and grammar and focus less on content.

Oh, Leanne-it is a LEARNED skill... know those 4 redos of CONFLUENCE.... NOT Macro edits, in spite of cutting 60K words... I didn't know HOW. Yes, I cut non-critical stuff, but I didn't re-conceptualize anything... and I need to. I think though, with the Cozy, I figured it out. I KNOW my edit on LEGACY is BIG... it classifies as REWRITE, and it will be a better book.

But I've come to the distinct belief that (at least for me) the rewrite is easier when you write fast and have holes and enforcements to fill. It is much harder to totally scrap something you spent a lot of time on (even though I eventually will).

Lawks a mercy, but you've hit the bunny on the head there. I never learned editing because (a) it was never taught at my school, as far as I am recall, and (b) I got out of essay subjects absolutely as fast as I could manage. Since the British University that I went through had no requirements for any humanities classes.

I have no idea of a real process for fixing up the story for a WIP, and I have so many many WsIP. I am currently engaged in a necessary rewrite of one of them for my NaNo, and that's the only way I know how to edit at the moment: start again, with lots of notes on plot and setting to make it actually _good_ this time.

But at some point I will have to figure it out, because this is not very time-efficient.

Tami - *skeptical* I dunno, if you say so... Somehow I still can't bring myself to cut those three chapters into one. :-P

Duncan - I hope it's the killer bunny I hit. ;-) I think you're right on the role of planning though - the more you do, the easier the rewriting is, but I dunno... I always feel stifled if I do it. *shrug* It's the laziness again. ;-)

Rewrite – I don’t bother. I just bash out any old rubbish. But I try not to involve myself I anything more than a couple of hundred words long.
Good luck with your project.

All the best, Boonie