I live in my own world, but it's okay, they know me here

Errrm. Hi. *waves feebly* I'm not let-it-all-hang out like our resident Tart, nor do I have evocative atmospheric childhood scenes like Chary. In fact, I'm pretty much a great big oddball. Sometimes I joke that I would've made a great 19th-century noblewoman - I can speak multiple languages, play multiple instruments, knit well and sew decently, write a neat hand (well, hands, actually...), and if you come over for dinner I'll send you away stuffed and happy.

I have a feeling that I'll have to do a few more of these posts, though, so I'll focus on the one thing that's making me a stressed-out heap of mush this week. 'Cause it's recital time. *cue ominous music*

As I'm sure you can all tell from my username, I'm a violist. Much to my surprise, after six years of top-notch conservatory training, I found myself doing a lot of teaching - and really enjoying it, to boot. So I ha 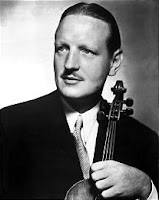 ve a bunch of students... and twice a year, they get up and perform, for me and each other and their parents/siblings/friends/whoever-feels-like-coming. Being one of those adults (in age, if not attitude) who actually remembers what being a kid feels like, I would never make them do anything I'm not willing to, which means I gotta get up there too. Let me tell you, anyone who says they don't get nervous on stage hasn't gotten up there in front of a bunch of staring little kids who think you're the reincarnation of Primrose (that's him on the left there) or something like that (yes, they know Primrose, he's on the wall of my studio, along with Fuchs, Tertis, and Clarke {I'll put up more when my printer stops throwing hissy fits}).

Recital preparation week is HELL. There's the obligatory rehearsal with the pianist, who is not me because 1) my parents wouldn't let me take lessons when I was a kid, 2) I don't have a piano at home to practice on and 3) I was never very good anyway, even after 5 semesters of lessons in college. So we need to work out tempo markings and repeats and cues and introductions and all that fluff. The site, well, I booked that back in June, so that's taken care of, but I do have to make sure everyone knows the time and place and dress code, signs up to bring a little something munchie to share after the performance, and coughs up a few bucks to cover the hall rental, accompanist fee and flowers, and - let's get real, I always lose money on these things. If I actually charged for my time doing all the prep work, they'd all have to fork over about $30, which is just not going to fly.

That's the complaining part. "So why the hell do you do it, then?" I hear you asking (yes, you, in the green shirt - yeah, on the left there). Many, many reasons... like the importance 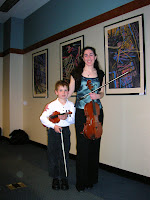 of having and meeting a goal; the fact that music is, after all, a performance art; the chance for them to hear (and sometimes be inspired by) each other; a really good excuse for me to keep my chops up ('cause if I'm playing, I'd better damn well sound better than even my very best student, ne?). Sometimes it's a stepping-stone on the way to something else - maybe there's an audition coming up and a student needs a place to try out the piece before they're getting scored on it. Sometimes the only thing that'll get a kid through a troublesome work is the fear of public humiliation if they don't get it nailed down (not all that proud of that one, but it does work). Sometimes a couple of friends want to play a duet, and where else are they going to show it off? They definitely get a good sense of progress by where they are in the recital order (the little guy in the picture there was 6 years old for that one - he's 10 now) - the further down the line they move, the more advanced they've become. (Oh, and where else do I get to wear any of the 9 formal gowns in my closet, anyway?)

Just to make things extra-nutty this week though, I forgot that the Veterans' Day holiday is not one of the "observed" ones - no automatic long weekend, so it landed on a Thursday this year. Guess when I had the first group class of the year scheduled? *facepalm* Group class is both a ton of fun and a screaming headache, something as necessary as it is nerve-wracking (for me, anyway). See, I hate being the centre of attention, and oh man, standing up in front of a bunch of people (even if most of them are under 4 feet tall) is terrifying. And I have to do it for an hour. Once we're playing, it's fine. The viola can speak for me, he's really good about that (yes, my viola is definitely a "he". No, I don't know how I know that, I just do.). The talking/explaining/corralling that goes on in between, though? Yikes. But the skills they get from playing as a group - the listening, the watching, the adjusting and the trying and the "oh hey I bet I can do that after all" - they're invaluable, and help prepare today's little munchkins for next year's elementary orchestra and middle school's ensembles and high school's chamber groups... Plus, holy cow, they are SO CUTE.

The best thing about my kids, however, is that they're all such interesting people. Kids who choose the viola - overall they're a pretty varied bunch, but there are generally two traits I can count on. They are smart. And they are weird. Most of them are bookworms (we might chat Harry Potter or Scott Westerfeld or Agatha Christie while unpacking), many have at least one unusual hobby ("Ooh, I can't make it Wednesday night, that's fly-fishing club."), and they not only say things that make me think but continually force me to refine and clarify my own thought processes. We have a deal, my students and I - I will never, ever answer a question with "Because I said so" or "Because I'm the teacher". Those aren't answers. They're evasions. Granted, my answer might be "I don't know", but I owe them that honesty if I really don't, and after all, if I can't give them a reason for doing something a certain way, then why the hell am I asking for it?

As I sit here putting the finishing touches on this post, I've survived the rehearsal and the group class, with only the recital left to go. Then I only have to make it till Tuesday and then it's Thanksgiving! My very favourite holiday! Food and friends - two of the best things around. But if I start in on that, this post will triple in length, so I will leave it there and wish everyone a happy weekend - but do please wish me luck tomorrow, just in case. ;-)
Posted by ViolaNut at 12:00 PM

Email ThisBlogThis!Share to TwitterShare to FacebookShare to Pinterest
Labels: Leanne Rabesa, Who am I? Friday

Interesting article. I played trumpet all through junior high and high school. But despite having played tons of performances and shows (with no small number of solos), when I got to college and took one-on-one lessons for the first time I was still excited for my recitals. Like you said, music is a performance art; and for those kids who don't play in an orchestra (or string quartet, or whatever)-- and who are just kids, after all-- I'm sure the recitals mean a lot.

The bit about "unusual hobbies" struck a familiar note, too. I split time with improvisational theatre, my high school band instructor was (still is) a hard-core camper, and my trumpet instructor was the county yo-yo champion (no kidding).

One question for you: Since when do string players have "chops"? We windfolk use the term as you did, but in specific reference to the development of jaw and lip muscles. Hm.

"Chops" as in "choppers", eh? I've never really thought about it, but we do generally just use it as an expression referring to staying in shape. It's amazing how fast callouses disappear if you're not practicing enough...

Leanne-this was a great little picture into your life! I really enjoyed reading it! (though hanging it all out isn't really so painful... I like that people know what to expect)

Good luck! It sounds like you have alot of fun and you really enjoy what you do.

As I read this post, I realized that you and I have much in common when it comes to teaching. The preparation, the lessons, the anticipation, the loss of funds (*smiles*) and the excitement to see those little faces (in my case young adult faces) light up when they "get" it. I find it so rewarding to see them after they graduate as successful young adults.

Good luck with the little ones at the recital. I know it will be a success!

Late in commenting as usual. But I have to tell you how much I loved this piece. You are exactly the sort of teacher any mother wants for her child, because you haven't forgotten what it meant to be a child yourself.
And don't even get into that bit about costing your time- I think the common factor of all Burrowers is that we lose money all the time when it comes to costing how much our time is worth. BUT, that also means we love what we do, and what greater treasure can there be?