Writing Rites, or a Right Way to Write?

Ah, rituals. They can give order to our lives, or hamstring the crap out of 'em. There are those that swear by them, those that refute them, and those that sort of look at them askance while backing away slowly.

When it comes to writers, it seems we're a rather superstitious bunch - I've read about writers who can't start unless they have a certain number of pencils at the ready, those who clear their desk of everything except the computer before starting, and of course the ones who swear by coffee shops are among the most visible out in the wider world. Googling "writing rituals" gets you upward of 281,000 hits. There are probably at least as many rituals as there are writers, but no clear consensus on the rights and wrongs of the matter. Clearly, however, they are a big deal. Me? Errrrm...

Well, to be honest, as with most things in my life, it's a bit of a mad scramble. When it comes to those things I churn out in a typed format, I'm usually flopped on my bed with

my laptop. There's frequently a kitty or two curled up on or next to me, and generally speaking, if I'm typing, there's a deadline (this blog, for example, or a WriMo). However, the computer has a major drawback, which I'm sure you've all spotted already - that's right, it has internet access! While this can sometimes be a bonus - I've just come from the Wikipedia page for Scottish Gaelic, for example, doing a little bit of "research lite" - mostly it's a distraction. Oops.

So if it's such a distraction, how do I get anything done? Ah, well, that's where the notebook comes in. If you read my last Writing Tuesday post (about handwriting vs. typing), you've probably already guessed where I'm going with this next bit too - namely, that when I really want to get something hashed out, I grab a notebook and a pencil (a mechanical pencil, mind - no sharpeners needed) and leave the house. Sometimes I pop down to the nearest coffee shop and feed my caffeine addiction while roughing out the next story point; sometimes I head in the opposite direction, to the cemetery, where I curl up under a tree and get down to business; this week, it was over to the Arboretum to rhyme up a storm for a picture book project one of my oldest friends dreamt up for us.

My first successful WriMo had some serious rituals to it - 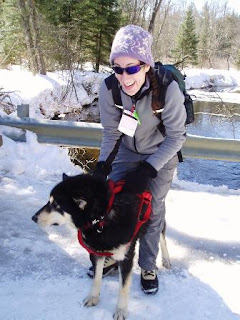 I'd get home from teaching around 9 PM, make a mug of hot chocolate and grab a pack of tuna jerky (yes, I'm serious. There is tuna jerky. It's not bad, either), then park my butt in my desk chair and pound away until midnight, at which point I'd write down my word count and take a five-minute stretch break; then it was back in the chair to get as much of a jump on the next day as possible before my brain went into shut-down mode. And I did exactly that every night for a month (well, except for the weekend I went dog sledding, but I made up for it afterward), and lo and behold, I clocked in at 50,006 words at the end of the month. I can't help thinking that I got more done when I worked at my desk (currently covered in books, bills, knitted gifts, and other items to keep my cat from jumping up there and wreaking havoc on cords).

Maybe I should go buy some tuna jerky. :-P

I can't have anyone looking over my shoulder when writing. Or a TV on. Or people in the room. Or a comfy chair. Or a draught. Or outside noise. Or small fonts. Or the wrong spectacles. Apart from that I'm fine.

Oh, I also must have liquids by my side at all times.

And the phone unplugged.

I have no rituals per se. Except that I tell myself when I'll write and what specifically (ie: a blog-post, the wip, a proposal, my script) -- so a schedule is my go-to, I guess.

I get distracted with the internet too. My "ritual" is when I'm working on a novel, I have to create a soundtrack first. Then, that is the only music I listen to while writing until I finish the project. It seems to keep me on target. And when I want to get a lot down on paper without distractions, I pull out the notebook too.

Not too many rituals for me...but I think they can prove a good way to transition from a day job to being creative.

The notebook and pencil is a good idea. In the old days it wasn't even an idea; it was the only option >:)

I also turn off all TV's, radios, etc. The only thing I don't do is turn off my router which would probably make me more productive without the internet to feed my procrastination.

I do have a cup of something to drink. That's about it.

As I'm sure some of you have guessed, I'm kinda trying to find some new rituals myself. ;-)

Jennee - now that's an interesting one... I'm a musician by education and profession, so I go a little bonkers if I'm restricted that way, though I admit that my current WiP has a built-in soundtrack since the MC is a musician himself!

Elizabeth - yeah, that's why I'm seeking one. :-P I suck at transitions...

CaH - good point. I keep saying I was born in the wrong century...

Chary - if I didn't have roomies who are even bigger internet junkies than I am (yes! It's possible!), I would turn off the router. Pass the coffee, wouldja? ;-)

Start water running, set stuff by tub, line up water and adult beverage, get naked, get in bath, write. In that order unless I've jumped the gun and gotten my adult beverage before starting any of this...

*giggles at Mark* NOT THE COMFY CHAIR!

When I have to write, I write anywhere, but when I don't "have to" write, I suck. Go figure.