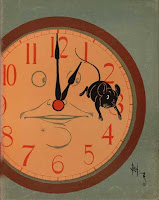 Hickory Dickory Dock,
The mouse ran up the clock.

Okay, seriously, what's so cool about the clock that a mouse (granted, a species not generally fêted for their brainpower, but whatever) had to run all the way up it? Did somebody put cheese up there? Maybe it wanted to play king of the world (or at least of the drawing room).

The clock struck one, the mouse ran down.

So he's easily scared, fine, that is normal mouse behaviour. But -

All right, I'll just say it straight out - when's the last time you heard the word "dickory" in any other context? You didn't, of course. Honestly, making up words is all well and good *cough*Burrowictionary*cough* but when there's only one in there, it rather looks like desperation for the rhyme, ne?

Let's look at another one, shall we?

Tuffet, huh? It's rather hard to find a good one these days; they're too hard, or too soft, or too grassy, or too dirty - honestly, you start to feel like Goldilocks, who is a fairy tale, not a nursery rhyme, so we'll leave her to her porridge and check out some more nasty food, to whit:

Eating her curds and whey.

Curds aren't bad, really - Heluva Good makes some pretty yummy cheese curds, I like those, in fact they were a staple snack for me my first year of grad school - but whey? Yuck! Do you know what whey really is? It's the icky watery stuff left after you separate the curds out. Blargh...

Along came a spider and sat down beside her
And frightened Miss Muffet away!

Now this I am in total sympathy with. I never used to have a problem with spiders and in fact thought people who got wigged out by them to be total wimps - until I saw Arachnophobia. *shudder* I was about 8 years old, and holy arachnids they scare the crap out of me now. No thanks. Ugh.

Nope, can't do that one, laughing too hard at just the first three words. Next!

One, two, buckle my shoe

Why should I? Are you too fat to reach your own feet or something? 'Cause if so, you should really stick to slip-ons.

Is there a draft? I mean, it's really quite nice out today, sunny and bright and more June than September.

Look, who are you to be giving all these orders? And unless you're a Manhattanite dealing with that freak tornado, I don't think you generally need to be picking up too many sticks - like I said, it's a nice day, you couldn't possibly need them for a fire or anything.

Then what did you want them picked up for?

You know what, I was sort of humouring you before, but this is the last straw, that makes no sense AT ALL.

Humpty Dumpty sat on a wall

What is it with the climbing-to-the-tops-of-high-objects thing? The mouse, HD here, and let's not get into the bloody cow who thought she'd take the biggest leap ever known.

Humpty Dumpty had a gr 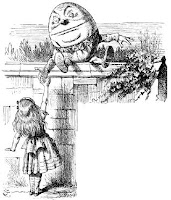 And this is exactly why you shouldn't go climbing the thing to begin with. Especially if you're an egg. I mean, duh.

So, all right, no offense to the horses or anything, but they don't even have paws, let alone opposable thumbs. What help are they going to be? And while we're at it, which king?

I give up. It's just not working out. For further reading, may I direct you to Hickory Dickory Dock and One, Two, Buckle My Shoe by Agatha Christie, and The Big Over-Easy and The Fourth Bear by Jasper Fforde. You may not get answers to what the rhymes mean, but they're damn good reads.

Tee hee, so true. What good would the horses be?! Neigh, I'm not surprised that most children make no sense at all when this is what they are served!

These rhymes make no sense at all, except when Poirot gets at them. Or Miss Marple.

Hahaha! Brilliant! What surreal filth are we pumping into our childrens' heads? It's sick!

Goosey goosey Gander, whither shall I wander?
Upstairs and downstairs
In my lady's chamber
There I met and old man
Who wouldn't say his prayers
So I took him by his left leg
And threw him down the stairs!

First of all what in the world are you doing talking to a goose? Second, why is an old man in your lady's chamber? It sounds very suspicious to me. Lastly, if the old man wasn't saying his prayers is that really a reason to throw him down the stairs? Sounds like that was just a cover story for the real reason. Was he in your lady's bed also? Hmmmmm?

Ah, see, this is why I hang out with you guys. :-) Marjorie, I didn't know that whole one, only the first bit - that's WACKED! *shakes head*

I always thought nursery rhymes were cool until I really found out what they meant. For example, Ring Around The Rosie:

Ring around a rosie (Bubonic Plague)
A pocket full of posies (Flowers for the funeral)
Ashes, ashes, (burn the bodies so plague won't spread)
We all fall down. (Everyone dies anyway)

Scary, I tell you!

I actually started to use that one, then one of my students went off on "One, two, buckle my shoe" on Wednesday night so I rewrote that part. ;-)