While I think it is FANTABULOUS for all of us to find what motivates us, I happen to think on that note, there is a bit of preaching to the choir here in the blogosphere. Anybody who is reading and networking about WRITING is at least to SOME degree, motivated. And those of us motivated, can find the help we need... can ask the questions that are nagging at us... but what about new writers?

I wrote once upon a time.

In my youth I wrote a lot. Mostly I journaled. I wrote angsty poetry. I wrote a lot of letters. But I knew I loved it. I wrote book plots... I dreamed of one day being a writer... And I had no clue. This was before the internet (I know... aren't I old? *snort*) But how might my path have been different if I'd had someone to encourage... not the JOURNALISM my mother wanted me to pursue (I am still afraid to talk to people and don't much like fact finding), but my writing of FICTION.

I took a short story class in college. I didn't KNOW at the time how different short stories were from a novel. I STILL can't write a short story. There was ALSO an assumption in that class that we had some clue (something I didn't) of the elements of a story. I think I was probably a bit of a joke because I just didn't know what I was doing.

I didn't try my first serious attempt at a novel until I was 27. I wrote half a horror novel, but didn't know the importance of knowing the ENDING to finishing the darned thing. I was also between years of graduate school and just ran out of TIME. I had to dive back into my courses... (but if I'd had encouragement of the 'only takes a page a day' sort...)

It took Harry Potter to teach me that. You heard me... JK Rowling was my mentor. The world of fan fiction finally taught me how to FINISH a story. But more importantly, the support system found me some people to be accountable to. 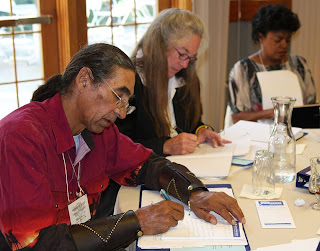 Just because I didn't have a good mentor, doesn't mean I can't BE a good mentor. In fact I would argue writers are the only ones really interested in developing other writers. Unlike other fields where only so many people can make it, so we need to stay on top, each writer has a distinct voice and a distinct set of stories. Helping someone develop their story will NEVER hurt me. In fact critiquing others makes me BETTER.

And encouraging young writers is just plain good karma. We all know it takes a while (a very long while, honestly) to really get it down, but why not just encourage people to work through that part? How many people have given up because they didn't quite have it when they were young, and nobody ever told them that doesn't mean they will NEVER have it?

Encourage young people. Find people earlier in their careers and give them a hand. Be as free as you can afford to be with your time, and generous with your encouragement. So go forth! Mentor!

Hmmm...this is an interesting concept. I had a former student invite me to be part of her (primarily much younger than me) writing group. Maybe I'll join up...

I like your way of thinking. Since I teach high school, I will go forth and nurture those who are to afraid to take those first steps. I will also foster those who have no one else to cheer for them.

i wish someone had mentored me. entering the writing world was like being lost at sea without a light house.

i'm giving away 10 free query crits at my blog today. hopefully that will make for good mentoring karma. :)

NH: with a GROUP, I'd make sure there is help or benefit for you, too--though a group of readers is definitely helpful--if they are MOSTLY young, but a couple seasoned, I say DO IT! (otherwise you may want to help one at a time)

Chary-PERFECT--high school kids definitely are the prime age for nurturing! I am going to let my daughter's English teacher know, I think, as her school requires 'community' learning, which is sort of a mentorship arrangement.

Amie-Me, too! I really would have gotten serious so much sooner, had I had a clue how to go about it! And DEFINITELY- giving away the query crits is a great karma inducer!

I've been really blessed with solid good and generous mentors in all realms of my many-realmed life. I do mentor others and I've also signed up this year to get a writing mentor because I could STILL use one.
yay!

I have a husband and wife writing team that serve as my mentors and inspiration. Their work ethic and laid back attitude toward publishing's stresses has really helped me out.

I try to encourage young writers at the schools whenever I can. Kids are so much more creative than adults are..I'd like to regain a fraction of the creativity I had when I was 9 or 10...

I can't mentor anyone, I don't have a mentor myself. Unless you count my amazing English teacher that I had last semester but didn't get this semester.

I have said, "God bless J. K. Rowling for bringing us all together so I think it makes sense to see her as a mentor.