Yesterday was International Talk Like a Pirate Day, as every civilized human on the planet surely knows. To ease the Monday morning holiday letdown, today's blog is devoted to seafaring adventures (with liberal interpretation).

So what, exactly, is the great appeal of these type of stories? Some might argue that ocean-going adventures involve saltwater, and, hey, everyone drinks water, and who doesn't like salt? But personally, I think it's an appeal to two of our strongest instincts: making tools and exploring the world. Exploration vessels are almost invariably the cutting edge of their day's technology, from the primitive rafts used to cross the Red Sea 50,000 years ago to the Apollo landing modules used to explore the moon. And such exploration itself is a necessary part of the equally important drive to colonize new living spaces. 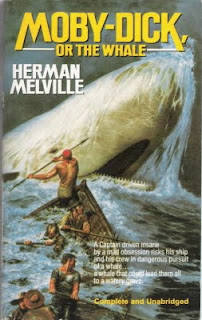 M. Dick is the Mona Lisa of literature. It's a quality work, but it's mostly famous for being famous, and not necessarily for standing head and shoulders above its peers. And I don't think whales have shoulders anyway. So if you fancy yourself a sophisticated reader, you need to pick up a copy, or at least skim the Cliff Notes so you can fake it.

By his own admission, Melville was writing a hybrid. One aspect of the book deals with Ahab's obsession for revenge, man's relationship to nature, and a host of rich metaphors that provide easy fodder for secondary school literature instructors.

The other aspect is an ocean-going adventure story. The crew of the Pequod don't really do much exploring, but Melville tells a great deal about the technology and techniques involved in whaling. Ever wonder what sort of supplies a whaling boat is stocked with? Or how long it takes to bleed out a harpooned whale? How to get the oil out of its head? What to do about all the sharks that show up to munch on the carcass? It's all there, all fascinating, and (be advised) pretty darned gruesome. 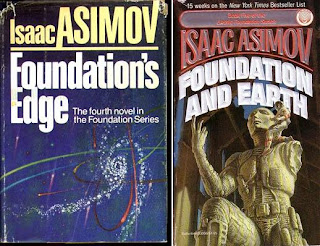 We have an entry from the science fiction genre. These two novels are sequels to Asimov's famous Foundation trilogy, but all characters and events are sufficiently described so they can be read without prior knowledge of the trilogy. Foundation and Earth focuses on the continuation of one of the storylines from Foundation's Edge, namely, the search for Earth. Yep, that's right: a mere 20,000 years in the future, and they've misplaced the original planet.

Although the book is science fiction, and necessarily incorporates some far-fetched technology, Asimov himself was both a scientist and a big fan of science. His devotion comes through marvelously as the crew of the Far Star search for clues around several mysterious stars. The reader gets to learn about the formation of star systems, and the type of information that an astronomer could use to detect the presence of life or technology from a distance. All of this happens whilst a story of exploration and colonization is followed backwards toward its source. 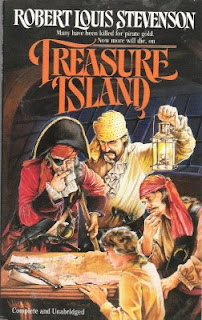 Okay, I'm sorry to be a negative navigator here, but this book is a basic bundle of overused unoriginality. It's got an adolescent protagonist who's "caught up in the action", a pirate captain named 'Long John Silver' with a freakin' parrot on his shoulder, a bunch of hype over buried treasure and a map where 'X' marks the spot. It's the worst collection of clichés since Le Morte d'Arthur and looks like it was written by--

Hang on. Incoming message from my editor.

Oops! My bad. Apparently, none of this stuff was cliché until other writers picked through Treasure Island and copied the ideas. But still, I think that gives you a pretty good idea of what the book is like.

Which leaves us a bit of time to talk about pirates. One Jane Yolen (in the commentary of my paperback edition) wrote concerning this most famous pirate, "every reader is most taken by the one-legged sea-cook Silver because he is a morally ambiguous man. That is, he is neither all good nor all bad, which was a first for this kind of adventure fiction." Yolen also notes that this was far from acceptable at the time, quoting a contemporary critic of Stevenson who said: "It brings the reader into rough company, among a good many horrors."

I'd like to agree and disagree. At the literary level, Yolen is absolutely correct. Long John Silver is not a melodrama villain; he is not dragged out with his worst side showing for the audience to boo, like a Snidely Whiplash, or the local thugs at the beginning of an A-Team episode. In that sense, he sets an excellent precedent, because his moral status is not dumbed down and spoon-fed to the reader.

At times, L. J. Silver may come across as morally ambiguous to other characters in the story. But is Silver himself morally ambiguous? Does he have some mix of good and bad qualities which, if not perfectly average, at least approaches normal?

Not hardly. And identifying him as such is making the same mistake as the unnamed critic above: namely, that a person's moral character can be equated with his outward behavior. But the worst of villains, thieves, murderers, and legislators often show a charming face; they might genuinely care for the comfort of their guests, as Silver did; often, their feelings for those within a select circle of friends are perfectly normal. The morally bad choices happen by creating distance between oneself and one's victims, making it easier to generate a spurious justification or to focus one's attention on personal gain.

Okay, enough preaching. You get the idea. Pirates are bad. So are mobsters and highly-organized bands of professional thieves. Just keep that in mind, then, and you have permission to freely enjoy the most lurid pirate stories and mafia films without shivering your timbers.
Posted by The Burrow at 12:00 PM

I had to assign Moby Dick to myself for a high school book report to force myself through it - but I'm happy to say that once I made it through the first 5 chapters or so, it got really good. :-) I'd also suggest a visit to the New Bedford Whaling Museum if you're in the area... among other exhibits, there's a 4-foot-tall dessicated sperm whale penis that shouldn't be missed. *snort*

You're implying that a 4-foot-tall dessicated penis can be missed?

*snort* I come in for literary talk and you lot have descended to four foot peni. Penises? Penis? I guess there is only one...

Anyway... Moby Dick was my first 'classic' after college when I was actually opting to read because I WANTED to, and I too liked it after I got into. Queequeg in particular appeals to me.

I read Moby Dick when I was 13 or 14, and skipped all the parts that I was not happy reading. That I never tried to read the book again says a lot about how much it gripped me. Like you say, the Mona Lisa of books.
Now the Foundation series is a whole different story. I read the first four books in high school. Loved them, re-read them and achieved closure in my own way. Then many many years later, I discovered there were two more books, and was in a new kind of heaven! Asimov is my first love.
Treasure Island I read when I was seven- an age when you love anything you read. 'nuff said.

Leanne - does that penis look anything like the Hindu Shivling? If so, I have seen much bigger ones?

Well according to most dictionaries the plural of penis is penes. But, most common use is penises. Go figure!

I enjoyed Treasure Island as every did does. However, I am ashamed to say that I have never read Moby Dick. *hangs head*

Oh and congrats Mrs. Bones on snagging a pirate! Arrgh!