Okay fine, so that's a computer term, but it's also how I frequently refer to my own bizarre memory bank and its jumbled contents. So I thought I'd turn the strange thing loose this week and see what comes spilling out. I guess that makes this part stream of consciousness, part memoir, part confessional, and part just plain weird. Ready? Yeah, me neither, so here goes:

So I've got these roommates, see, and they're pretty cool and all but sometimes I subject them to the horror that is my brain when the floodgates are open and all the barriers are down (translation: I say weird things when I have a few drinks). This means that I now sullenly bear the nickname "NS", which stands for (what else?) non sequitur, and for those of you who weren't paying attention in Latin 2, that's a passive construction in the third person singular and means 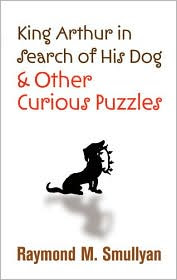 "it doesn't follow". Or at least, it doesn't follow logically, which when you think about it is really not all that fun because while logic is terrifically necessary and I for one love logic problems (let me plug Raymond Smullyan here), no one ever came up with things like hand-knitted snails or the lumberjack song by thinking logically. Who says, "Okay, we've got this homicidal barber and we need to get out of it so how 'bout he does a musical number about cross-dressing in the woods?" when they're thinking logically? As a matter of fact, Palin and Jones came up with that one on a self-imposed this-thing-gets-20-more-minutes-and-then-we're-going-to-the-pub deadline (Palin told the story at an event I attended, so this is first-hand dirt!), which is one of the better kinds of deadlines you can have, if you ask me. Now, it was Douglas Adams who said something like "I love deadlines, I love the whooshing sound they make as they fly by", and it was also Adams (and Lloyd, but who's counting?) who came up with a definition for the formerly mostly-useless (if mostly harmless) town name of Shoeburyness that comes in extraordinarily handy when you sit down on the train and eurgh, it's still warm from the previous person's bottom, although honestly that only came up this morning, while the context from the other night's mad rant was in the toilet department. See, I had a couple of male roommates when I first moved to Boston, and we got so sick of one of them having such revolting aim that the other one dragged him off to teach him to pee sitting down. Glad I wasn't a fly on the wall for that one, although we DO have several flies on the wall here, which are stuck to the flystrips we got when the stupid insects decided to launch a field invasion. We also left a spider web alone, as the occupant was doing a lovely job catching the horrible things for us. No words in the web yet, so I suppose we don't have a Charlotte-descendant, which would have been rather nice if highly creepy - I mean, if I came into the dining room and found a web saying "Some Pig" in the corner of the window I'd probably be pretty worried, which the spider should be, actually, considering I have this fuzzy little bug-hunter who seems to take creepy-crawlies' existence as a personal insult, so he stalks and eats them pretty mercilessly. You'd think he'd have learnt his lesson after he ate a hornet a couple of years ago and it stung the inside of his mouth, leaving him all puffed up on one side and pretty darned uncomfortable, but the vet assured me that as long as he wasn't having any trouble breathing that he'd be just fine, so I breathed a great big 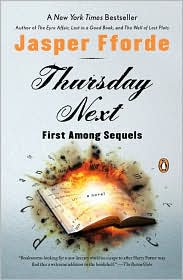 sigh of relief and biffed off to go meet Jasper Fforde, who was in town promoting First Among Sequels, the Thursday Next novel that came out in 2007. Highly recommend his stuff, it's literary and wacky and alternative history and a tremendous lot of fun; interestingly enough, before he got published he worked as a focus puller (I'm still not totally sure what that is) on a bunch of films, including the excellent but slightly disturbing Quills, which stars Geoffrey Rush as the Marquis de Sade (you can guess where the "disturbing" comes from now). I first saw it in college, at the awesome theatre a few blocks from school that showed more "arty" fare (as a sampler, other films I saw there included Branagh's version of Hamlet, Shine {also starring Rush - he did lots of cool stuff before he hit the high seas as Captain Barbossa, y'know}, and a bunch of films in French that I can't remember the titles of now), though I can't remember with whom I attended that particular showing - those memory mists are flowing in and causing trouble now.

I could, of course, have gone off on a completely Australian tangent instead, since Rush is an Aussie, in fact I do believe he's the first Aussie to win an Oscar for playing an Aussie (that would be David Helfgott in the aforementioned Shine), and I was actually walking with an Aussie (that would be Briony, who has been referenced here before {check the Burrowictionary if you don't believe me}) when I saw the poster for the Fforde reading/signing - but I think I have scared you all enough with what comes boiling up out of the cross-wired collection of cells and synapses I call my brain.

Maybe I need another drink...
Posted by ViolaNut at 12:00 PM

I have a sudden and most pressing urge to present you with a fancy diploma that bears a giraffe wax seal (which is a seal in the shape of a giraffe [though I have never seen a giraffe shaped seal - do they still have flippers?] and not a seal of giraffe wax, whatever that is) and the words "Digressionism approved" on it.

This is INDEED a terrifically random post, Leanne! And I'm pretty sure that 'then to the pub' deadline is what works best for me.

And good point about having Charlotte in the corner being actually CREEPY. I thought you'd be disturbed by 'Some Pig' because of being a vegatarian and worrying your roommmates were slipping you bacon.

I think you did scare people off, Leanne. For the longest time, I did not, dare comment on Margot's blog because she knew so much, I was scared to even show myself.
Silence is often all you can offer in the face of obvious brilliance, and random through it may presume to be this post is freaking brilliant.

Or maybe just freaking out. :-P Wonder what the deleted comments said... I could speculate, but I think I've done enough damage... ;-)

Leanne - those were duplicate comment ;) And some days are like this. It doesn't have to do with the post or subject or anything in particular. We can't expect everyone to love us every day :P (I still think you deserve that diploma!)

@ Leanne - I have no idea how it happened, but the same comment got posted three times- I deleted two fo them because it sounded weird to have the same thing thrice- didn't realise you may wonder what I had typed in the other two times.

And Mari is right- somedays, you just don't get comments. Yesterday must have been one of them. So it today- nobody seems to want to know about HWMNBN's love life either.