In case anyone forgot how things generally run around here, it's Saturday! And that means we have a new drabble winner! But if I just tell you who it is straight off, that really doesn't do much for the whole building-suspense thing, does it? 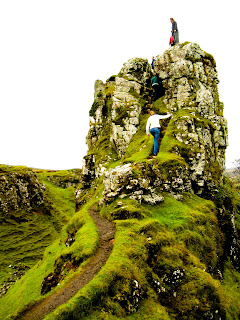 So anyway, this week's image was this lovely photo, taken on the Isle of Skye (which hangs out off the west coast of Scotland, for those of you who didn't feel like looking that up). It's a thoroughly beautiful place, it has its own quidditch team (Pride of Portree, for those of you who don't have Quidditch Through the Ages near at hand), and I went to school with a cellist who grew up there (her name was Eilidh, if anyone cares, and I've borrowed the name for a character in the WiP, about which I'm sure nobody cares).

All right, all right, enough dithering.

And the winner is...

Peeking out between two blade-trees, I see that the Big Ones are climbing through The City again. Their feet crush my favorite cluster of blade-trees, and they knock away my favorite sitting rock on the highest ledge of The City. Why do they continue to blunder about—their wingless, graceless selves? Why do they insist upon disrupting my peaceful morning with their thunderous uneven steps? What if we erased the Blank Expanse they carved through the blade-trees? Would they leave us then, and never return to ruin our homes and disturb our morning flights? Would they ever leave… in peace?

PS--I love the name Eilidh. Excellent choice for a character.

*dies* The first ever drabble I write... hey, was I the only one to enter this week? :P Haha. Thanks so much, lovely Burrowers. <3

@ Kassy- I have been MiA this week, so really have no idea how many drabbles we received. But I can tell you this. When I logged into the email on Monday/Tuesday, I found your drabble, and even though I was in a real hurry, and in no frame of mind to read anything, your drabble "spoke to me". Anyone could see you had captured the essence of the photograph, and I knew someone anyone would have a tough time trumping yours.

Congrats to you Kas! It's a great drabble!