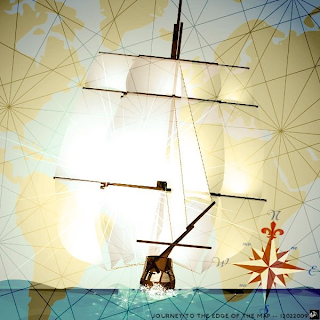 Journey to the Edge of the Map
by Joris Ammerlaan

It was my task to select an image for the weekly Drabble Dare. Easy, right? But I'm not much of an art person, and a particularly poor critic when it comes to things like color, shading, and facial expression.

Lucky for me, we can always plunder the prolific work of Joris. I popped over to his Facebook page and easily found something I liked.

The vessel (I'm going to call it a great galleon) is portrayed with large sails against a backdrop of a world map. I notice that the exaggerated sail size gives them proportions similar to the global map features; this congruency is further enhanced by the by the angular, criss-crossing map lines which make the continents themselves similar to the overlapping sails.

A simple "interpretation", then, is that the sails and map lines have complementary features because both provide the same benefit to the intrepid sailors: They make exploration possible.

Now let's consider the ship. It's comparatively small, and an actual ship is but a miniscule speck on the actual planet. But our attention is drawn to its connection with the sailcloth by way of the exaggerated boom (aft sprit?) at the stern. So the ship is part of the sails (and visa versa), which also makes the ship part of the massive, unexplored world on a scale that cannot be explained by its meager size. Thus I see this painting as very optimistic: The unknown peril implied by the title ("edge of the map") can be embraced with confidence thanks to the rational sciences of navigation and shipbuilding.

But enough of that. The Burrow wishes to thank everyone for their submissions, and with further ado, the Drabble Dare winner is:

And here is the winning drabble:


CONGRATULATIONS, Jan!
Excellent job of capturing the spirit of the image. The danger, curiosity, and confidence were all there, encapsulated in two original characters and their natural dialogue. And all in merely a hundred words, too!

Tune in tomorrow for the new Drabble Dare challenge.
Posted by The Burrow at 12:01 PM

Congratulations, Jan.
Loved your tale- it was full of human emotion, wonderment and all manner of fantastic things.

It was my favourite too - reminds me of the Disney movie Treasure Planet, for some reason (which I know is based on Treasure Island, but still...). ;-)

Congratulations Jan! It is a fantastic drabble, and very apt to the artwork!

Well written drabble and perfect for the image.

Thank you so much! I'm honoured and deee-lighted. It was fun to write because I'm always thinking about ships and pirates and little boys caught up in the life...

I loved this drabble. It was a most worthy winner of this challenge :)

Certainly. I thought it looked like a bowsprit-- but I did say I have trouble with shading, right?
-Jason