A little over two and a half years back, I took part in my first half-marathon. I was never a runner, and wasn't even particularly athletic, but had registered on a whim, and having registered was determined to see it through. On the days leading up to the race, I told myself three things - 'finish the race, try to run at least half of it, attempt to do it in under three hours.' Since I had never run more than 13 kilometers before the race, I had no idea if any of the three was even possible, but I was determined to give it my best shot.
At the 20 kilometer mark, I was within striking distance of all three of my pre-race goals – I had a little over a kilometer to go, had definitely ‘run’ much more than twelve kilometers, and at that stage could have crawled backwards and still made it within three hours. Minutes from the finish line, guess what I did? I slowed down and started walking. It wasn’t that the legs couldn’t run anymore or that the lungs were bursting – my mind decided that it did not matter whether I ran or walked any longer, so the heart told me to Quit and walk the rest of the way. I tried getting myself to run, but couldn’t manage more than a few steps at a time.
The last kilometer IS the hardest! 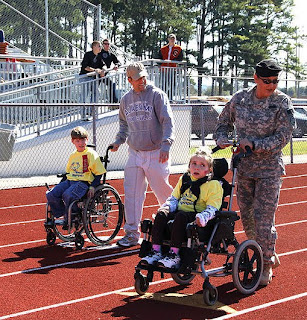 And then, I saw him.
A young boy with cerebral palsy, valiantly pushing his wheelchair, while his concerned father walked beside him. That was the picture of true grit – he was so fatigued he could barely move his arms, but still plodded on unassisted to reach the finish line. There was nothing in it for him – no cash prizes, no medals, no sound bytes. Nobody would have blamed him had he allowed his father to assist him. But he did not. He was determined to do it on his own, and he was doing so.

Tears came to my eyes. I wanted to go to him and congratulate him. Instead, I decided to pay a silent tribute to him by doing what he would have done had he been in my place – I started running again. And I continued running till after I crossed the finish line.


One year later, I was back again. This time I was battling cramps; every step I took was excruciatingly painful. I should have dropped out, or at least slowed down to a walk. But that was
never an option. If that boy could wheel himself towards the finish line, so could I. One hundred meters from the finish line, I built up speed. I finished in a sprint and collapsed the moment I crossed the finish line. The Heart Won. 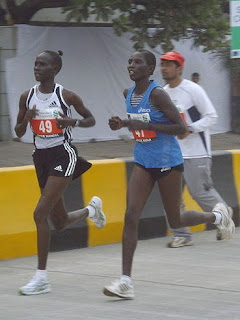 Running is the best metaphor I can find for Life. Whether you run on the road or on a treadmill, running is less about the legs and the lungs as it is about the mind and the heart. There are days when you are rested and carb loaded, when everything is going well, but after a couple of miles, you quit because you just don't 'feel like' going on. And there are days when you muscles are sore and your breath is coming in short gasps, when every step is sheer torture, but you keep running, because quitting is not even an option.

On any given day, when you lace up your running shoes and do your gentle stretching exercises, you cannot predict how the session is going to go. It is only when you start running that you know whether your legs and lungs are going to determine how far and how fast you run, or your heart.
You may have run 7k a day, everyday for the past three weeks, but on the 22nd day, you may suddenly decide you have had enough. That is the day when you will ask yourself, 'Why on earth am I doing this? Will anyone even know if I drop out, much less care?', the day when you question the personal goals you have set for yourself, 'Will the world be a better place if I finish running 7 kilometers today, instead of dropping out at 5?', the day when when you even question why you are running at all, 'The number of calories I burn covers only half a brownie - doesn't it make more sense to just indulge the chocolate tooth less?' On those days, you have to force yourself to run, you have to tell yourself that you cannot quit, you need to remind yourself that it is not about burning off an indulgence. And if you still drop out, it is about dragging yourself to the next run the following day.
Because, when you love running as I do, no matter how many questions you ask yourself, or how many times you give up - you are always back. That is Running. That is Life.

What keeps a runner running is exactly what keeps a writer writing. It is the compulsion to do what you love, because you cannot live otherwise.

And that is called Motivation. Sometimes you have it, sometimes you don't, but it is for you to keep seeking.
_______
Images in Public Domain -
Runners
Wheelchair athletes
Elite Athletes
[If Rayna M. Iyer can bring a fraction of the Motivation she brings to Running to her Writing, she would have a substantial body of unpublished work on her hard drive. But something is better than nothing, right?]
Posted by Natasha at 12:00 PM

Thank you for this motivational arse-kick. Always helps.

I love this; Passion is key, inwhatever we choose! We must persist in attempting our goals and setting others. Heart n' mind are key to
achieving any measures of success!
We now have a glimpse of how big your heart is~xXx Keep running, it helps the writing~

That's a wonderful way to look at it. I'm amazed at marathon runners. I am no where near capable of running that distance and so my hats off.

I felt like that on my marathon in Dublin. I held a token that represented my mother - who had crippling arthritis - and my grandaughter, who is perfect far as I know. I walked though - I run like a girl. Like a girly girl. But it is just as far walking. I had to really set my motivation and I did run across the finish line! Jan Morrison

@ Mark- motivational arse-kick is what we specialise in, and we aim to give satisfaction ;-)

@ Clarissa - distance is in the mind - take it from me. But attempt only if insane - take that also from me.

@ Jan - walk or run, a marathon is a marathon, and once you complete one, you are a different person.

It IS a great metaphor for life, isn't it. And I think, like with all difficult goals, the first is hard... getting yourself GOING, then the middle isn't so bad (if you are in any kind of shape for it) but then if you are truly pushing, it gets hard at the end again...

It's been a couple years since I really ran, but I used to look at the one mile mark as... once I passed THAT I could go at least 5 or 6, but that first was hard... (miles 7+ then got hard again, especially if I hadn't eaten right)

What an amazing story! And a nice reminder that no matter how big our obstacles SEEM, we can work through them.

Best motivational piece I've read in a long while.
Rayna, you never cease to amaze.

@ Tami - Absolutely- once I breach the 1.5 km mark, I know I can keep going till I decide to stop. But that first 1.5 km is so difficult.

@ Elizabeth - thank you. Most things are surmountable.

@ Mary - thank you. I knew what I wanted to say, but I also know the piece is all over the place. Good to know at least some of it got through.

What an excellent and inspirational post. Makes me want to write AND run albeit not simultaneously. ;-)

This was beautifully written. I really enjoyed how a young man with a disability was your inspiration to finish the race running.

@ Kimberly- you can do them simultaneously. Very often, my am sorting out outlines and characters in my mind while running- no other distractions, so can be done.

@ Chary- the best thing about running is that someone always inspires you, and you often inspire someone else.

excellent post! And I kind of feel like running blows out the brain fog from sitting too long in front of the computer screen...

Plus, I often get ideas while running. Not sure why, but I can't wait for fall (no longer running in beat the heat survival mode)~ :o)