Hello everyone! It’s Saturday again (I know, they come around really quick, don’t they?), and that means it’s time for the results of this week’s Drabble Dare. This week’s image was a scene depicting a noted Briton called Samuel Pepys. Pepys is famous for the diaries that he kept for around ten years in the second half of the seventeenth century. A member of parliament, his recollections are an important source of information for that period in British history. He not only covered his personal life, but gave details on several key events including the Great Plague of London and the Great Fire of London. It was his connection with the written word that helped me to decide which image to use for the challenge.


Anywho, enough rambling, it’s time to announce the winner of this week’s Drabble Dare! Capturing the historical mood beautifully, and giving us a detailed (if brief) history of the depicted characters, this week’s winning drabble is a perfect little ditty of one hundred words. Without further ado, here is the drabble: 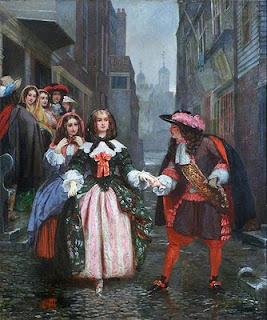 
Hoping her own wasn’t trembling, she took the man’s hand. Gentlemanly he was, or so he carried himself before her father. His chivalrous demeanor impressed her, but his personality remained a mystery. The unknown waited for her at the end of the journey to her gentleman’s land.

Her recent marriage to this mysterious foreigner brought vast wealth to her family, allowing her father to travel, increasing his clients, and her sister to receive the medical treatment she needed. The benefits far outweighed her fears. For the love of her family, she continued on her journey.

She didn’t once look back.

Congratulations to Rosemarie Connolly! If you would like to read more from Rosemarie’s hand, you can find her blog here. And don’t forget to tune in tomorrow for the next Drabble Dare!
Posted by Amber T. Smith at 12:00 PM

No wonder it was the winner, beautifully written. I can see it. :D
Trying To Get Over The Rainbow

Rosie, that was fabulous! You really did the full story in just 100 words. That's not easy to do!

AHH! I was *not* expecting that. Thank you, Burrowers!