I have to admit to a little panicking when I knew I had a 'Reading Monday' post coming up. I read - obviously - and I read a lot, but I don't generally read anything that has been published recently. I also have a habit of re-reading favourite books over and over, so while I am usually to be found with a book - if not in my hands, then at least within grasping distance - it's probably going to be one of two types: one, a book that you have probably read for yourselves already, or two, a 'fluffy' book, which I tend to read when I need something light to distract me from everyday stress, but which probably wouldn't interest most people if I tried to review it.

So, feeling a wee bit flummoxed, I ventured to my bookshelf and prayed that something would inspire me. My eyes skimmed over JK Rowling, Stephen King, David Eddings, Dan Brown (you can mock, but I like his stories, so there) and JRR Tolkien - been there, done that, right? - and I skipped past Julia Quinn, Virginia Andrews, Catherine Cookson et al (I think you can probably see that I'll read any and every genre [but no Stephenie Meyer, I hope you'll note]*snort*), and then my eyes fell upon RA Salvatore, and that helpful little lightbulb that occasionally lights up in my brain appeared.

For some reason, RA Salvatore - who I think is an awesome author - doesn't seem to be as well known as he deserves. Maybe it is only over here in Britain, but when I ask about his books in libraries and book stores, I usually have to give further details before the assistant knows who I am talking about.

Salvatore writes fantasy, of the elves, dwarfs and dragons kind. He's written a few Star Wars spin-offs, and other bits and pieces, but me, I'm a fan of his Forgotten Realms books. My husband has been a fan for years and he frequently told me that I should read his collection. I looked at the covers, read the blurbs, and never fancied them. Then one day I was so bored that I decided to give them a go. I read through a dozen books in two weeks, that's how hooked I became. Which goes to show, you shouldn't always judge a book by its cover, right? 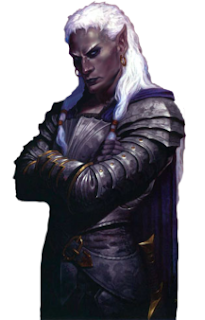 Anyway, this is supposed to be a review of sorts, so I suppose I should stop rambling and get cracking on the purpose of this post. I'm going to concentrate on the first trilogy in the adventures of Drizzt (pronounced 'Dritz') Do'Urden. Technically this should be the Icewind Dale Trilogy as these were the first books published, but the character of Drizzt was so popular that Salvatore went and wrote a prequel - The Dark Elf Trilogy - and these are the books I'm going to talk about today.

The character of Drizzt is probably one of my favourite characters of all time. He's an elf, but a twisted version of an elf. Actually, he's a twisted version of a twisted version of an elf. Confused? Let me explain. Drizzt is a dark elf, and by dark elf I mean an elf who lives beneath the surface (in the Underdark), and as a race are famed for their evil and cruel ways. Appearance wise, think the complete opposite of Legolas (of Lord of the Rings fame) - dark elves have ebony skin, white hair, and bright red eyes which are perfectly suited to seeing in the pitch darkness of their habitat. The dark elves are a barbaric race predominantly ruled by females; the matriarch of each family are known as Matron Mothers, while the daughters of the families all aspire to be powerful priestesses. First and second sons are tolerated, but daughters are what are hoped for when a child is expected.

The first book, Homeland, deals with Drizzt's birth and childhood. Drizzt is the third son to be born to Matron Malice, and is pegged to be sacrificed minutes after his birth. Luckily for him, one of his elder brothers murders the third brother (not so lucky for him, right?), so Drizzt is spared. The murdering of a sibling - with no remorse - demonstrates just how callous these dark elves (or Drow) really are. With the murder weapon still in hand, Matron Malice spares her now second son, and hands him over to one of her daughters to raise until he is sixteen (so maternal, these female Drow, aren't they?). During the scene, it is noted that Drizzt's eyes are not of the usual red associated with the Drow, but have a lavender hue instead. The family fear blindness at first - an affliction not tolerated in the Underdark - but it is soon established that the newest member of the Do'Urden family is not to be cursed in this way.

Drizzt's early years are glossed over, though we are given a glimpse of the hardships he is forced to endure as the youngest son in the female dominated family. The story really starts when Drizzt comes of age and is sent to begin his training as a soldier. Already dissatisfied with the actions and way of life of his race, Drizzt begins to see more and more of the Drow's ways, and with each new discovery he becomes more disgusted with his heritage. By the time he nears the end of his training, Drizzt has decided to break away from the Drow and seek another life as far away from the Underdark as possible - namely, the surface world.

Book two of the trilogy, Exile, follows Drizzt as he journeys through the Underdark on his quest to find a new home. He is accompanied by Guenhwyvar, a magical black panther that can be summoned for short spaces of time from a small statue that Drizzt 'picked up' near the end of the previous book. There are several characters introduced along the way, but mostly Exile deals with Drizzt's inner struggles as he quite literally fights his way to the surface world. Near the end of the book, Drizzt encounters his first true friend, Belwar, one of the Underdark's resident gnomes. Gnomes and Drow elves are bitter enemies, so it takes time for the friendship to form, but when it does it proves to be satisfying and beneficial to both parties. So much so, that when the time comes for Drizzt to leave, the Drow elf questions his decision and wonders whether he should leave the Underdark after all.

Of course, he does, which is where the third book, Sojourn, picks up the story. Definitely my favourite book of the trilogy, and possibly my favourite book of the entire series, Sojourn deals with all kinds of hardships, from the almost torturous effect that the glare of the sun has on Drizzt, who has lived his entire life in total darkness, to the cruel prejudice that he has to face when he encounters people from the surface wold.

Sojourn is really the heart of the entire series, for it is this book that delves into Drizzt's character the deepest. Drizzt has always known he was different to all the other Drow, but he doesn't learn the full meaning of his nature until now. Encountering an old man named Mooshie (as he is affectionately called), Drizzt discovers his true calling. He is a ranger, no less. A calling so far removed from his Drow roots that it is almost impossible to believe. Mooshie teaches Drizzt the ways of a ranger, and encourages him to embrace his calling. They become great friends over the course of several months, and Drizzt is happy for the first time in his life.

All three books are peppered with plenty of action and spectacular swordplay, with snippets of drama and angst sandwiched in between. We also get some humour now and again, which helps to lighten the sometimes darker tones of the story. I'm not usually drawn to these types of books as a rule, but something about the character of Drizzt Do'Urden hooked me from the very first page. He is a multi-faceted character, with a fair bit of dark mixed in with the light, so above all he is interesting. You want to know how he will fare in the years to come, and you want to find out if he will ever be accepted in his adopted new home.

I could rave and rave about these books, but I think I've rambled enough for one day. *snort* I truly believe that Drizzt Do'Urden is one of the best characters ever created, and if even one person discovers the magic of his story after reading my ramblings, then I've accomplished what I set out to do.

Why I have NEVER EVER heard of that???? Ugh, I so need to read those ASAP!!!!!! dammit, now I am all bitter cause I haven't read those and I am desperate seeking for them since NOW!!!

Ana - see what I mean? Hardly anyone knows who I am talking about when I talk about Drizzt.... it's a tragedy, that's what it is. *nods*

Drizzt, for trivia fans, was inspired by Thomas Pynchon's Gravity's Rainbow. Or that buzzing noise caused by your microwave.

Nice ramble! Rambling IS A FORM OF ELOQUENCE! WHEN WILL PEOPLE LEARN???

He looks scary! Like Legolas on steroids! (Completely unrelated, but still, since you're the resident LOTR expert - does Legolas live in Legoland? o_0)

I've never heard of these either, and they DO look great! I love dark twisty twistedness.. as I think you know.

Mark - you are so right! Rambling IS a form of eloquence! *nods wisely* And I personally think thet 'Drizzt' is the noise a wasp makes when it uses an electric razor.

Mari - I'm not actually keen on that particular picture of Drizzt, it's not how I imagine him at all. But it was the only one on Wiki, and Wiki was the only source I could find that was okay to borrow a picture from (if indeed it IS okay to borrow a picture from Wiki *shifty*). As for Legolas, I think you will find that he lived in Mirkwood. On the other hand, the guy who played him in the movies could quite possibly be from Legoland, if the plastic style of his acting is anything to judge by.

Tami - I can't believe how little known these books are. I mean, I KNOW they're not everyone's cup of tea, but given the large amount of fantasy fans out there, it's a mystery to me that these aren't more popular.

Yup, I snorted at the comments too....

Well, here's the bookstore-nerd's theory on why they're not better known - at least in my store, they're shelved under "RPG Novels", aka role-playing. Most people, even fantasy fans, including me, see "role-playing", think D&D, and go "ugh". *shrug* Sounds like it's worth looking a bit closer at that section, though...

Leanne -Ah, now I understand. I didn't realise that there was a RPG for these books until AFTER I had read them. The book sections aren't nearly as detailed over in our book stores. Salvatore is merely found in the fantasy section.