What defines a summer read? Easy, happy, sappy, fun? For me a summer read is just one that is QUICK... that I want to carry around with me and open whenever I have a minute. Well I've read a couple... and anticipate a couple more that ought to make your summer read list...

The Pull of Gravity by Gae Polisner

I looked forward to this one for months, and the reviews amplified my need to read... It caught me a little surprise, mostly because... I guess I was thinking 'critical acclaim' meant... I don't know... that it would read like those lists from high school of 'should reads'. On the contrary though, the voice is young and authentic. Nick Gardener is a teenage boy of normal intelligence and periodic moments of awkwardness. He has a neighbor he calls the Scoot who has a rapid aging disorder, and a 400 pound dad who barely gets off the couch... none of which is great... but when the Scoot seems to really be approaching death and Nick's dad takes off on a trek of 'Fat Man Walking', Nick feels like the world is closing in.

Enter Jaycee—another of the Scoot's friends, in the form of a quirky girl. Jaycee has gotten a bee in her bonnet that she and Nick should fulfill the Scoot's dying wish of getting his first edition signed coy of Of Mice and Men to the Scoot's long time absent dad.

The story is full of laughs and tenderness, and all the pain of being a teen when life is dishing you things teens really shouldn't have to deal with. It is a sweet tale that totally falls into that 'summer read'. I highly recommend it if you like YA books. (came out in May)

Now THIS ONE I haven't gotten to yet because it just came the end of last week, but it is next. SQUEEEEEE! And look, look, look! (okay, nearly impossible to see) I made an acknowledgment pages!!!! It's hard to read, but this is a first for me—an acknowledgment... This came because I had a dream about a murdered food critic and passed it on to Elizabeth, as I knew I'd not write a restaurant story, and knew she was. I'm very excited to see how this works out, and, as Leanne says, Elizabeth is the QUEEN of little old lady cozies.

I also LOVE this getting a book before it's out thing. I know you book seller types sort of take this for granted, but it is new to me. besides... this picked by the author to GET it is special, too.  I'm just thrilled! Cozies are PERFECT for summer... the perfect dose of zany and 'lets solve this'. This one is coming out June 7th.

And watch, June 14, for Elizabeth to be a guest at Confessions of a Watery Tart. I will include a review right thereabouts, too... 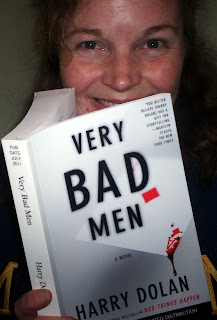 I am only going to do a brief review here, though it deserves much longer. I interviewed Harry Dolan when Bad Thing Happen came out, and I think my blog was high on his google stats for where people searching for him went looking (in fact that interview is the #3 result when you google Very Bad Men)... he got a fair bit of traffic and so a couple months ago he contacted me and asked me if I wanted an ARC (advanced readers copy) for his next book (BOY HOWDY, DID I!?)

I am 90% done and this one does a couple really amazing things... for starters, it continues with a couple writer inside jokes. David Loogan, the MC is an editor at a literary mystery journal, but the primary writers joke comes in the form of the murderer and how he 'sees things'... Words on a page have colors and motion, and the poor man can't tolerate adverbs *snort * The second rather phenomenal trick Dolan pulls off is having a PoV of the murderer, but managing to have the shock twist as to the murderer... if you know what I mean... which surely you don't. Dolan has a very bendy mind, and this has been a fabulous read. It's no wonder he managed to get Stephen King to swear in his book blurb last time. Now this isn't the light beach read for people who want HAPPY, but it is definitely a carry-it-around pageturner. This one isn't out until July 7th.

I will do a longer and more satisfying review on this closer to his release, but I just wanted you all to have a heads up on what to watch for.

So enjoy your summer reading!!!
Posted by Hart Johnson at 12:00 PM

My summer read is the book that I read every summer on the beach: The Gambler by Dostoyevsky, and some other books, we'll see >:)

These look like great summer reads. I will definitely look them up for my Kindle. :D

So thrilled to be on this list, Hart, and so SO jealous you have VERY BAD MEN! Can't wait! :D

how cool is that!- you got on the acknowledgment pages! Really great pics here- might have to add them to my tbo list!

Ha! So glad you got the book safely. My last envelope was kind of beat-up looking and my handwriting is (as everyone can see in the picture) really bad and I was worried the post office might think it was too scary-looking to deliver!

Thanks for giving me some more books to add to my TBR list!

I'm glad you liked the book, Hart. Thanks for the review!