Today, I am a mother! Honestly though, I've been a mother for over forty-one years. I know, I know - how could that be when I'm only 38 myself? But tout alors! It is true. My second son, who believes himself to be the NEW IMPROVED model, turns 39 years old today.
I adore being Calvin's mother. Calvin is a total trip. He has been since he was born. Really. The nurses brought him to me after they'd cleaned him up a bit - this was in the olden days when you had a room with other new mums and the babies were kept in a nursery - well away from your incompetence, thank you very much! At any rate, they brought him to me, with his sprig of very red hair standing straight up and his humungous cheeks, looking like Baby Huey (check out old cartoons if you don't know this character) and I laughed in delight. The nurses got all huffy but I didn't care. They didn't understand. I did. This guy was going to be his own man right off. And that was and is totally true.
It is a challenge to mother any children - or it is for me. I'm not your classic ma. I forget that you aren't supposed to make fart jokes with your eight year old sons. I'm not consistent. Except for loving them that is. I delighted in all their crazy ways - and Calvin has taken that and run with it. He won't settle down - he lives for awhile somewhere doing something and then he is off. I think - cool dat! Why should he settle? Other than the fact that I would like more grandchildren, I don't need him to settle. He tells me about his adventures in Croatia, in Sweden, in England, in Banff and Quebec and I adore him for it. He is creative - both the boys are - and we love to talk about movies and books and art. He is kind - I've seen him taking care in his own imitiable fashion - no one could pin it on him but I notice. If you can't tell, I adore him to pieces and liked being his mum. Oh we fought! Man, we fought. We drove poor Jesse, his milder brother, crazy. But we liked it. We were engaged, connected. He can be infuriating but so can I.
Once, I came home, tired from work - to see my rose bushes lying in ruins - mowed down. Calvin was running over the hill to hide from me, Jesse was hooting and told me that Cal had rode over them with the ride-on mower. When caught he said "I just gave them a good hard pruning!"
That's my lad and I hope he has a swell day. 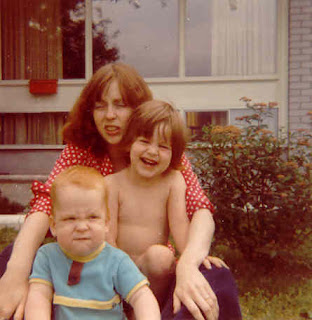 me, Jess and Cal making weird faces
Posted by Jan Morrison at 12:36 PM

Email ThisBlogThis!Share to TwitterShare to FacebookShare to Pinterest
Labels: Jan Morrison, Who am I? Friday

Oh, Jan, Happy momiversary! Your son sounds perfect! My aunt would call that wanderlust your son has 'itchy feet'...

Love this! It came straight from your heart, straight into mine. Both your sons sound like wonderful people - I'm not surprised, considering the mother :)

"I'm not your classic ma. I forget that you aren't supposed to make fart jokes with your eight year old sons. I'm not consistent. Except for loving them that is."
- I could have written that!
Happy Momiversary, Soul Sister.

Ahem. You are TOO supposed to make fart jokes, or else what's the point in having small boys around? ;-) They are GREAT excuses to act like a little kid (for those who need such excuses and don't do it on their own... *ducks* ;-) ).