Ever since I got my Kindle, I've been developing a new reading habit. Or actually, it's a new book buying habit. The free samples you can download has become the single most important factor determining whether I'll end up buying books or not. I've previously argued that this means writers now have to be even more aware of the importance of "the hook", and the "research" I've been doing the last few months supports this view. I've bought only 6 books (though some of these were collected works, so I guess those should count as more than one book each) on my Kindle, but I've downloaded around 50 samples. Thus, today I thought I'd review a random selection of those samples to try to see if there is a common denominator to what makes a Kindle sample appeal to me as a reader. Note - unless otherwise indicated, I've only read the sample for these. In the cases where I've also read the book, this review is still of the sample alone, and not of the book as such. 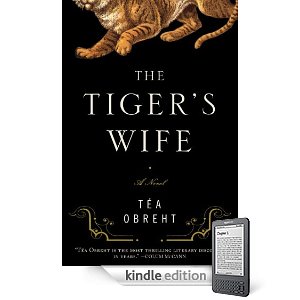 The Tiger's Wife - Tea Obreht
This sample pulled me in from page one. It starts with a memory - the vivid description of a little girl who has an extraordinary grandfather, a man you - the reader - learn to respect from the very start of the sample, and you can feel the awe of the little girl run through your own veins. The first few pages also makes it evident how important tigers are to the story, but it is the grandfather, and the relationship between him and his granddaughter that brings the story forward.

The sample triggered my interest not only by the promise of an emotional journey with the main character, but also the setting (a post-war Balkan), the voice (through shifting narrators Obreht still managed to shine through her own tone), and the language (hard to believe this is a debutant).

The verdict: You will already have guessed, but this book quickly found it's way into my "Buy" pile. I really liked the rest of the book too, and you can find my review of it here.


Three Stages of Amazement - Carol Edgarian
It's the economy, stupid. Set in today's US (or even more specifically, it starts on New Year's Eve 2008/2009, in California), this is the story of a marriage in deep trouble, trouble that is deeply linked with the burst of the bubble economy that has caused husband Charlie to forget about his wife, Lena. Charlie harbors secrets that might complicate things further, while Lena feels (and is) neglected, being the main caretaker for their children, including preemie and cerebral palsy infant Willa.

The setting intrigued me, and the character descriptions - elaborate, but never forced - made me want to know more. Yet, the sample provides no indication that the plot of this book will be particularly interesting. Charlie's secrets seem to be the only hint - and it is more or less revealed that these secrets are not of the juicy kind. Now, this isn't really a problem - I love a good character-driven book - but often they are of the "slow read" variety, and I find that the Kindle format doesn't do these justice.

Verdict: Since I loved the characters and the writing, I put it on my "Wishlist". But for now I have a feeling it will stay there until I can get my hands on a paper copy.


One Day - David Nicholls
This book had help. I have had it recommended to me by someone I respect, and I've read several favourable reviews. Thus the sample came with expectations. To a certain extent, they were fulfilled.

Again, I like the characters. The two main characters come from different backgrounds, social strata and they have very little in common, other than one night together in celebration of graduation. This night, however, a bond is apparently formed, because they stay in touch for what is apparently the rest of the book.

The rest of the sample illustrated what I've been told is the great strength of the novel - the dialog between these two. The sample didn't really go far enough to make me understand quite what it is they see in each other, but if they continue speaking to one another in this fashion, I believe it might still be worth a try.

Verdict: I put it on my wishlist, but a friend offered to lend it to me (paper copy). I suspect that I'd otherwise wouldn't have gotten back to it in the end.

The Kane Chronicles: The Red Pyramid - Rick Riordan
I've read the Percy Jackson series, and I loved it. When I learned Riordan was writing another series, then, I naturally wanted to check it out.

As far as samples goes, this is a class act. Riordan is an expert of many things - hooks and cliffhangers being one of them. The sample ends with one of the latter, and by the time you reach it you've already had plenty of hooks to pull you in, tightly. It's all good fun like the Percy Jackson books were, though the feel is perhaps slightly younger.

Verdict: I only put it on my wishlist, but this is one of the books there I know I will eventually buy.


Room - Emma Donoghue
At first the narration in this sample bothered me. It's a very young boy, Jack, and there seems to be certain abnormalities with him and his living situation (such as breastfeeding at the age of five). Jack is all alone with his Ma in their Room, and he apparently thinks Room equals the real world. Everything outside of Room is Television, or not real. It took me a while to realize why they were inside Room, and what was going on. The sample ends without properly explaining this, and that was one of the major reasons I wanted to read more. Not a cliffhanger per se, but it had a similar effect.

Verdict: I'm not sure I'm comfortable praising this sample, but it did make me buy the book. And so far (about 30% in) I do like it. But it feels like I bought it for reasons entirely different than what normally makes a good Kindle sample.

As you can see, I didn't include any samples that put me completely off reading the entire book. Why? Well, partly because I've taken to deleting samples I don't like, and thus they are not available on my Kindle anymore. Secondly, though, I guess I am unwilling to unfavourably review a book based on a sample alone. I do think it is important to capture the reader from the start if you are to use the Kindle sample function to successfully promote your book. BUT, not all books are best from the begining. Some books take longer than other to get into. Some require a different pacing than what the Kindle makes me feel is appropriate (though I might be the only one who feels a Kindle is reserved mainly for fast-paced reading?). Some books are best read in the bathtub (which is NOT recommendable with en electronic device...). I think it's a shame if the world of books were limited to books that make for good free samples on the Kindle.
Posted by Cruella Collett at 1:02 PM

Will look into the others. I am not familiar with them.

I grabbed our freebie copy of the Edgarian at work today; I can mail it to you when you get home if you want. :-)