So I like alliteration, so sue me. Oh, and coffee. REALLY like coffee. A lot. Very much so. Yeah. Hang on, I need a cup before I get going here... Right, okay, got my coffee, got a large feline parked on my arm, so I think I'm ready to go on with this list.

A lovely series with copious caffeine and the usual high corps

e count. Claire Cosi (okay, I'll stop with the Cs now, but that really is her name) takes over the management of the Village Blend, her former mother-in-law's coffeehouse, as well as the apartment above the premises, and starts serving up fabulous drinks and solving strange murders in her spare time. A great cast of recurring characters, including her ex-husband, their daughter, an eclectic crowd of baristas and oh yeah, the obligatory hot cop, keep things moving and are thoroughly entertaining to boot.

I might be stretching things a little bit with this one, but oh well. In any case, this is one of the Christies that has been rewritten into novel form (it was originally a play and was adapted by Charles Osborne). Poirot is on the case when a noted physicist calls to report a possible breach of security on important information - but lo and behold, poisoned coffee takes him out before the famed Belgian even arrives, and the secrets have vanished as well. There's a reason Dame Agatha outsells everyone but the bible and Shakespeare... and since this was only issued in this format in 2000, even longtime fans might possibly have missed it.

ile (they seem to be out of print, sadly), but I dearly love them and own, if not all the entries, then I'm only missing one or two. They're maybe not the most brilliantly written, but they're lots of fun and there are plenty of kitties to go around. Alice, a chronically-out-of-work actress who makes most of her income as a cat sitter, manages to get into all kinds of tricky situations, whether in barns, backstage, or on buses. I was introduced to them by a friend who bought me (not surprisingly, given the title) A Cat With a Fiddle for Xmas when we were in high school; it does make a bit more sense if you start at the beginning, though, which is the one pictured here.

Okay, fellow cat-people - hands up if you've ever felt like your cat was trying to talk to you. In these mysteries, the cats actually DO talk - for real, in English and every 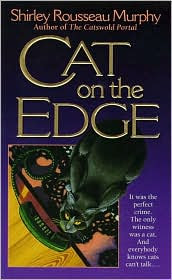 thing. Joe Grey, a big ol' grey (duh) cat, realizes one day that he's starting to understand what his human is saying to him. And then, inexplicably, he can speak as well. Over the course of the series (16 and counting) Joe and his similarly-talkative tabby pal Dulcie (and, eventually, a kitten called Kit) help the hapless humans solve all kinds of crimes, through some feline spying, anonymous phone calls, and general kitty cleverness. There are a few theories floated about how the cats gained their voices (and not ALL the talking cats are good guys...), but I'll let you discover them yourselves.

The Cat Who... - Lillian Jackson Braun

One of the original entries in the genre, most people have probably met Koko

and Yum Yum, the crime-busting Siamese team nominally belonging to newspaperman Jim Qwilleran (mind the W!). First appearing on the scene in 1966, there was a nearly 20-year hiatus between the 3rd and 4th entries in the series, but after that more appeared regularly until 2007. Not much is generally known about the reclusive author, other than (at least according to Wikipedia) she's not dead yet! Some of the earlier ones have gone past feeling dated and just seem kind of retro now; and if some of the later ones read like they were perhaps (ahem) "phoned in", well, honestly I don't really care when I'm in the mood for this kind of kitty fun. :-)

I'm still not entirely sure how I feel about these - there are only two books in this series so far. The cats, they're cool - as described, they sound like flame-points, Himalayans 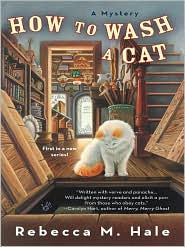 perhaps (though the cover art resembles a Turkish Van), and there are two of 'em, Rupert and Isabella. The action goes down in San Francisco and centres around Uncle Oscar's funky old antique shop, which has roots reaching all the way back to the Gold Rush. The bit that kinda weirds me out is that you don't find out the name of the first-person narrator till the end and it's - well, I guess I can't tell you, due to the whole no-spoilers thing, but it's a little odd. Interesting secondary characters and solid descriptive passages liven things up, and anyone with a mega-digger will giggle when Rupert gets going in the litter box; I'm reserving judgement a bit longer though, hopefully a third entry will shortly be forthcoming.

And here we have a couple more of the supernatural kitties - Owen and Hercules, th 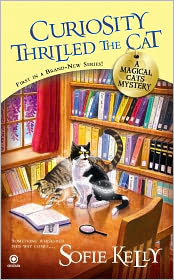 is time, who can - no fooling - turn invisible and walk through walls, respectively. This is the first in this series (second one is due out soon), and I quite enjoyed it - I mean, come on, we've got cats, a library, and a murdered conductor! (I have had many, many conductors I wouldn't mind murdering, lemme tell you.) A nice twist to the revelation, small-town Minnesota setting (but with Boston ties, yay!), and a healthy coffee addiction on the part of the main character (you knew I was going to work the coffee back into this post) puts this one - or rather, its sequels - squarely onto my must-buy list.


That'll do it for me for today - I still have coffee to drink and kitties to brush!
Posted by ViolaNut at 12:00 PM

Coffeehouse Mysteries I love. Read only three of them, but they were fun.
The rest seem great too.

these all look like fun - and will keep us doing the java jive...

Oh, fun set! I haven't read any yet, though I have fondled Cleo Coyles... had I more cash, they would have been on my list. I should probably seek them at the library in any case. Great ideas for reads!