The Visitor
I work for a big retail chain, whose name I won't mention here. But it's a retail chain and it's very big (hint, hint). My store recently had the "privilege" of hosting a big-shot visitor from corporate headquarters, something that happens only about once every year.

Fortunately(?), our gang is well-rehearsed in the preparations for visits from a regional manager, visits that happen every couple of months, and were able to spring (stumble) into action several days before the arrival of Ms. Corporate Executive.

The preparatory technique was most apparent to me as I was stocking shelves a few days after the visit: I would open a new box of merchandise, find the proper shelf location (using my excellent memory), and discover that it was already stuffed with the wrong product (one that was fully stocked in its own proper location); the original label had been yanked, and another (typically incorrect) label had been hastily placed to vaguely match the stuffed product.

This roughly quadrupled my workload. Instead of merely putting the new merchandise in its home, I had to (1) research the situation to discover what was what, (2) remove the bad label and make a new one, and (3) repack the extra merchandise in an improvised container to be stored in the back room. Hundreds of extra labor hours were scheduled, at a cost of thousands of dollars, just for the purpose of creating this mess.

It was all done quite deliberately for the "benefit" of Ms. Corporate Executive. Things like empty shelves and piles of unlogged back room merchandise reveal operational deficiencies. My own naïve thinking is that it would be wonderful for Ms. Executive to see these, because she (allegedly) has the executive wisdom to correct our errors, and (purportedly) the executive power to correct the source of problems if such is beyond our control.

What am I missing? My first hypothesis is that Ms. Executive is a blithering idiot.

My second hypothesis is that Ms. Executive is vaguely responsible for the state of our store and is afraid to look bad to her own superiors. Therefore, she warns us well in advance of her visit. Then, she gives the store exactly the casual appraisal, a wide-view visual inspection, that she knows we expect from her, one that ignores a multitude of costly errors at the level of finer detail. She concludes by sending us a glowing letter of praise, a copy of which is no doubt made for her own performance file. But if this hypothesis is true, then her own superiors must be blithering idiots.

Either way, someone is a blithering idiot.


(S)ET(I)
In the search for intelligence, let us therefore turn our immediate attention to the stars. If no extraterrestrial intelligence exists, the question is moot; or, if they do exist but will never contact us, they may as well not exist at all.

So let's assume, as the only relevant case, that alien intelligence does exist, and they might eventually contact us. What sort of logical conclusions can be drawn?

First, if there are two intelligent species in the universe (us and them), then there ought to be thousands, perhaps millions, within an advanced technology's range of contact. There should also be millions of other planets that are currently developing intelligence, either on their own or as a result of more primitive organisms being seeded. The universe is just sooooo big.

But not all species are advanced enough for interstellar travel and communication (we're not). Therefore, a finite number of species must have divided the task of watching developing civilizations amongst themselves, in addition to the tasks of maintaining ambassadors with one another and keeping watch on life-bearing but pre-intelligent planets.

Ergo, there is some kind of 'Earth Committee' that has been tasked with handling humanity. Such a committee must be concerned with potential long-term threats from Earth, because no species can evolve without an instinct for self-preservation. But they must have some morality of benevolence, or at least tolerance, because they have not destroyed us, as an advanced civilization could have easily done long ago.


Second, there is no need to search for them. In a few decades at most, we will have the technology to detect chemical signs of life on distant planets. These signs (such as free oxygen in the atmosphere) have been detectable on Earth for hundreds of millions of years. Therefore, the Earth Committee has known about us for a very long time, and would have already placed monitoring stations nearby (perhaps in the Kuyper Belt). When they feel the time is right, they will contact us.


Third, they have not openly contacted us. But with nanobots or even microscopic robots, there is no technological barrier that prevents them from influencing events on Earth.


How does that all add up? The Earth Committee is responsible for Earth. And Earth is a mess. If they show up now, it will make them look bad; and even if their superiors/peers are understanding, the Earth Committee will still be looking at a tremendous slate of problems. I think they'd rather not be burdened with all of that.

Still, I'd like a visit. Fixing our problems isn't practical, but there's something else we can do to make dropping in a more palatable proposition for the Committee: We can phoney things up.


Prepping the Planet
Let's focus on the most visible problems first-- like deforestation. What would the Earth Committee think of clear-cutting? Sure, we could explain that timber companies don't cut down their own young trees any more than a hog farmer slaughters piglets, and that rotational clear-cutting is sometimes more efficient in the long run. But not all clear-cutting happens as part of a good management plan. More to the point, the aliens don't want to hear about it. So here's what we do: Everybody needs to haul their plastic Christmas Tree out of the attic and drive it out to the nearest bare patch. 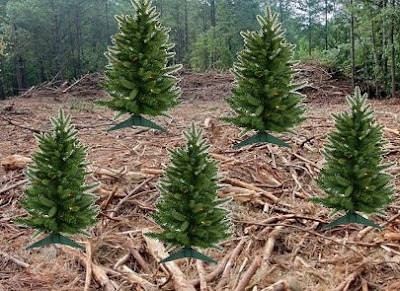 They'll believe because they WANT to believe.

Simple, right? Next environmental problem: Global warming. The temperature is, unfortunately, as plain as the time of day. Now I, for one, would love to hear some advice from an advanced intelligence, just as I would have loved to hear Ms. Executive explain why some of our shelves were empty. Maybe the aliens would tell us to spend ten more years developing infrastructure so we could afford to cut emissions for the next hundred; maybe they'd tell us that we're out of time and have to cut them now; maybe they'd tell us to stop focusing on carbon and research ways to stimulate the growth of plankton. But, again, they don't want to get involved! We simply have to hide it.

Voila! We create a new temperature scale, which I hearby christen 'Centigreat'. Water freezes at -2 degrees Centigreat and boils at 98 Centigreat. Now everybody set your thermometers back two degrees and get used to the new scale.


War and violence... tricky. Or perhaps not. I recommend that every army and paramilitary organization simply keep a suicide note on file for each of their combat personnel. If they don't write one, forge it, or just claim its existence. The deceased can't contradict you when you say that he died willingly, even eagerly, for the promise of greater rewards. Problem solved. Who says we can't learn from terrorists?


Poverty and starvation? Again, I'd love to hear the alien's take on this. Perhaps they'd tell us to adopt a North Korean-style system of social ownership and central directives. Maybe they'd suggest the Hong Kong economic model, where private property encourages the creation of capital goods and people are free to produce without begging permission from those who produce nothing. Unfortunately, the more obvious the answer, the more embarrassed the Earth Committee will be if confronted by it. Therefore, I recommend we produce several billion of those t-shirts that are silk-screened to look the front of a tuxedo and distribute them to the world's poor. Heck, with lower-grade fabrics and mass production, it should be possible to give them real ones.

'Cause you just can't look poor and starving while wearing a tuxedo.


What about shortages of energy? Food? Health care? For anything else that looks impossible to fix, and difficult to disguise, we should just create a high-level organization. Declining education? How about a Department of Education-- I mean, it's a freakin' Cabinet-level department! Lack of capital? Let's set up a World Bank-- come on, it's totally, like, global. It doesn't matter if any particular institution can't improve things, or even makes them worse. What's important is that we appear to be doing something, so the Earth Committee has something positive to put in its report.

Sadly you've exposed an extremely accurate assessment of what appears to be happening on a grand scale. They leave a metre wide strip of trees along roads where they've clear-felled huge tracts of old growth forests here. People believe it's not happening because they can't see it! Have you thought of selling that suicide note idea to the military? I think you're on to something there. Sue

omigod that is so brilliant. I love the pushing our christmas trees into the ground thing.
What is the matter with us? Perhaps it will be the end of the world this Saturday.

I LOVE this. You've brought up so many valid points, and in a humorous way. &*^%ing brilliant I say.
Tina @ Life is Good