So y'all may have gathered that I have one of those brains that rather resembles an antique shop - tons and tons of old junk in no apparent order, but the owner knows exactly what and where everything is. As you can probably guess, this makes me a pretty good addition to your standard pub trivia team, if I do say so myself.

A bunch of my (current and former) coworkers and I head out to a local watering hole every Tuesday night in an attempt to win a $25 gift certificate towards our food and drinks (and rest assured, there's an awful lot of both consumed over the course of the evening), both by knowing or guessing the right answers and by carefully betting our allotted points. It's all kinds of complicated, our trivia night... lemme explain:

First thing we get is a picture round. 10 pics of who-knows-what - this week was famous Houstonians, sometimes it's alien movies, one-eyed characters, cartoon dogs, you name it, we've probably had it. This is where I tend to be reasonably useless - I just don't do faces. Fortunately, this is why we have a team.

Then comes the first quarter, with four questions, and here's where the strategy comes in. Point values are 1, 3, 5, and 7, each to be used only once; but the trivia jockey doesn't assign them, we do, so the trick is to put the higher values on the ones we know and save the low ones for when we're stumped. Second quarter, same deal.

Halftime throws another wrench into the works - we get a total of 5 clues to someone's identity, and the number of points we earn depends on how soon we get the right answer (10 if we get it on the first clue, only 2 if it takes all 5). Screw it up, though, and you lose 5 points, so we tend to be more careful on this one. I love it when I can get it from the birthdate alone - this is why I run around Wikipedia when I can't sleep and read all the pages for the actors in whatever movie I've just watched (I've gotten 3 that way {if you care, they were Ellen Page, Orlando Bloom, and Joaquin Phoenix}).

In the third and fourth quarters, we have to bet 2, 4, 6 or 8 points per question, and there's a third quarter bonus as well. Sometimes we knock these out of the park - one week it was Broadway musicals, we were all over that one - and sometimes we suck miserably, like this week when it was namesakes for roads. Erm, no.

All this leads up to the two-question final, which is (duh) two questions; gotta bet even numbers on this one, 'cause if you get it wrong, you lose half of whatever you wager. Again, strategy is important here - this week we were two points down going into the final, and the team ahead of us gave the same answers we did (one right, one wrong), but we bet 10 on the right one and 4 on the wrong one and they did the reverse, so we won. Even with 3/4 of the team missing - oh, did I mention there was a wedding on the team last weekend? :-) 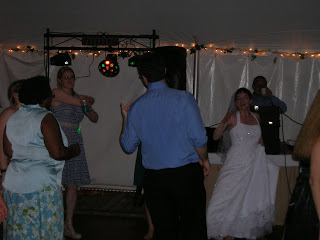 Most of the team.

So ta-da! This is pretty much what passes for a social life in my strange little world. We win about 60 or 70% of the time, which helps, but for the love of Guinness, keep the sports questions to a minimum!
Posted by ViolaNut at 12:00 PM

Email ThisBlogThis!Share to TwitterShare to FacebookShare to Pinterest
Labels: Leanne Rabesa, Trivia, Who am I? Friday

Yeah, we like it. It's a good chance to get our geek on while having too much beer and bar food. :-)