Alphabetical alliteration now? All right, all right, I'll stop after this one. Meanwhile, I have been busily getting up to speed on even MORE dragon lit, so here's another pile for my fellow fanciers of fewmets (okay, that's pushing it - fewmets, for those of you not familiar with the term, are, erm, well, dragon poo). 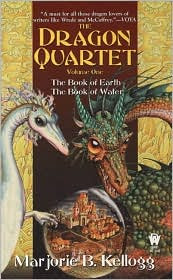 A fascinating take on the "four elements" - earth, air, fire, and water - except, you know, with dragons! The series takes us through many disparate times and places - from medieval Germany to some very strange and futuristic lands - and introduces four dragons and four humans who share the names of those elements. Like the Hobb at the end of this list, there are elements of eco-fantasy here, but it doesn't bash you over the head or anything. These are available in two volumes of two books each; not sure if they were ever published separately, to be honest. 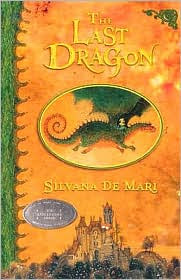 This could just as easily have been called "The Last Elf", but I'm glad it isn't because then I might have missed it. It's about more than dragons and elves, though, even more than prophecies and fate, and in fact it tackles quite a number of hot button issues (like racism and even genocide - there's a reason he's the LAST elf). It's translated from the Italian original (which doesn't seem to happen too often, I've only seen a couple of other kids' books coming out of Italy into the English-speaking market). Anyway, it can be read on several levels depending on the age of the audience, so give it a whirl with your favourite dragon nut and see what you think.

The proposed beginning of a trilogy, this one is, as far as I can tell anyway, not easily available in the US. Clearly that hasn't stopped me, mostly because I have wonderful frie 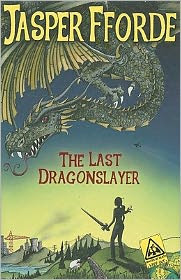 nds who live in Europe and can get me things. Anyway, I adore Fforde for his mad wordplay and generally irreverent take on pretty much everything, so turn him loose with dragons in the mix and I am one happy dragon nut. In an alternate UK (but not the same one as in his Thursday Next series) where magic is commonplace (if fading) and huge tracts of land (ahem... no really, it's actually land) are set aside for the use of dragons, the very last dragon is due to kick the bucket and an awful lot of people want to be the first across the border when he dies so they can claim part of the land for themselves. Foundlings, wizards, knights (or something like it), and petty warring rulers of course - can't wait for the next one! 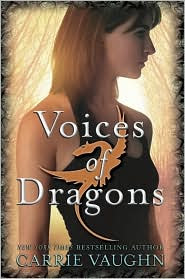 Vaughn is better known for her adult series of "Kitty" novels; her YA debut is set in an alternate USA where much of the Western part of the continent has been given over to the use of - you guessed it - dragons. Kay is perfectly well aware of the fact that she's really not supposed to be hanging out near the border, but sometimes you just have to get AWAY from things... but after a climbing accident when she is saved by a dragon, all bets are off. The ending leaves open the possibility of a sequel, but as Vaughn's most recent book is more about pirates than dragons, if she is planning to return to this world it's probably not going to be soon.

I originally picked this up because, duh, it said "Dragons" on it, but I kept it because it takes place in Nepal, a country I've come to know more about than I ever thought I wou 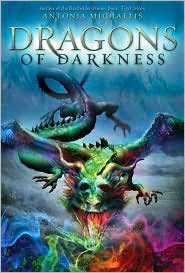 ld after my best friend married a guy who spent his Peace Corps years over there. Drawing on both real-world Nepali culture (from the Maoists in the mountains to monasteries and the monarchy) and pure fantasy (an invisible prince and the colour dragons), it's both a classic buddy story and political commentary. Christopher, a German boy who more closely resembles his Nepali grandmother, is inexplicably transported to Nepal after his (taller, blonder) older brother vanishes there. The whole book is translated from German; it's not a fast read, but it's a very good one.

I meant to include the second book of this trilogy in this post, but like an idiot I bought it today and then forgot to bring it home. So it'll have to be just the first book. Anyway, there's a lot more going on here than just dragons, and the dragons aren't dragons all the time,

either - they're shapeshifters. It's set in an alternate version of 1941, and starts in San Francisco before spending quite a bit of time in Hawaii (the second one heads to the Arctic). I have to admit, the first 5 chapters were awfully slow, but then, hey, creatures go rogue and there's a giant battle scene and things suddenly get interesting and, luckily, they stay there. Scirye and her lap griffin, a couple of street kids called Leech and Koko who each have things to hide, Bayang (one of the shapeshifting dragons), and oh yeah, the Hawaiian volcano goddess Pele, are up against a very rich, very unscrupulous fellow known as Mr. Roland who (big surprise) pretty much wants to rule the world. Once you get past the beginning, this is a great story.

The Coming of the Dragon - Rebecca Barnhouse 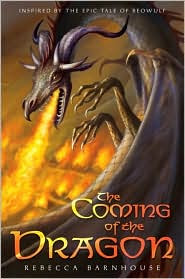 So you know the very end of Beowulf, where the dragon shows up? That's where this story takes off. Or rather, it starts with a baby being found in a boat, and Beowulf himself decrees that he shall not be killed, but rather fostered with an elderly woman, though sent to the king's hall for weapons training each year. Fast-forward until the boy is about 16 and some idiot wakes up the dragon. There's a fair bit of standard Norse fare, along with good character-building and a suspenseful storyline, capped off by the revelation of our foundling's identity.

This series of four books landed on this side of the Pond fairly recently, and they're an interesting mix of fantasy and - not steampunk, exactly, but when our protag 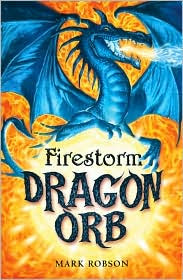 onists wander into the middle of WWI aerial battles while crossing between worlds, well, you can imagine what early pilots would have thought if instead of a plane they were facing a dragon! The dragons are differentiated by when they hatched, making four distinct types with different traits and abilities. Each is paired with a human, who may not be born until the dragon has lived for centuries, but when they arrive, they know it. The series is concerned with the quest for four orbs (hence the title) to restore the spirit of all dragon-kind; well-drawn characters and riddling prophecies make it well worth the read.

See, I said I'd get to Hobb and I did. :-) It seems that this new series is tied in with several others, but they stand alone quite well (I'm sure I'd get more out of it if I'd read the related books too, but I'll get there eventually, I swear!). These fall rather under the headin 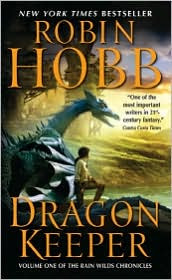 g of eco-fantasy - the Rain Wilds are a diverse and fascinating ecosystem which has profound effects on its inhabitants, both human and dragon. The first book spends most of its time setting up the second, which is where things really get going. There's a large cast of characters, though the list in the front of the books is helpful to keep them straight at first - once you've met them, they're easy to tell apart. It all begins with one dragon offering her help in repelling invaders in exchange for aid raising a new hatching of dragons - but they hatch deformed and weak and become more of a nuisance than a help. Rather than give away the plot twists, I'll leave them for you to discover - do buy both at once though, as you won't want to leave it after just one.

Wow, that's a lovely collectin of dragons! I've read most of them, but not Dragon Orb, which sounds like one I need to put on my list!

Charlotte - Yeah, I liked it - the continents are all anagrams from our world to their world, and having one of the kids be severely OCD also throws some interesting twists into the mix. Enjoy!