So nobody is surprised to hear I'm insane... I know that... but I am committed to NaNoWriMo in November. I've successfully completed TWO WriMos (one NaNoWriMo and then BuNoWriMo in June) so I am not SUPER freaked (except about the bear Mr. Tart becomes when I go under—that part is no fun). But both of the books I completed in WriMos STILL are sitting with a bunch of holes in them... (Oh, I have other books sitting with holes, BUT...)

My point is, I'd rather finish THIS ONE without a bunch of holes... (well, holes are okay, but not HOLES) So I thought I'd make a PLAN!!! 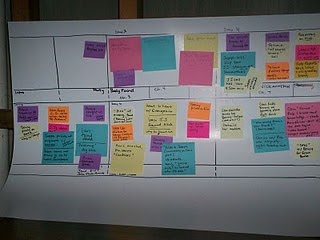 And the NICE thing is, since my last WriMo, I tried something... and it WORKED! What's more, I used it to write a MYSTERY and my WriMo idea is ALSO a MYSTERY (did you hear the cha*ching?).

So what IS this NEFARIOUS PLAN?

I am STORYBOARDING!!!
[This was the last one; isn't it pertiful!?] each square is a DAY and each column within the squares are separate chapters... it seemed to work for the pacing... about three new pieces of info a chapter... I am currently trying to incorporate feedback from my readers on the edited draft, and they seem to be mostly pleased... So what about for the WriMo?

For a mystery, we need to KNOW a couple things before we begin.

The things I have already worked out are these:

-Who dies?
-Who SOLVES IT (and who are her primary helpers?)
-Who are the suspects?
-What is the MOTIVE of each suspect? (yes, they all get a motive... it would be rude to make them suspects, otherwise). 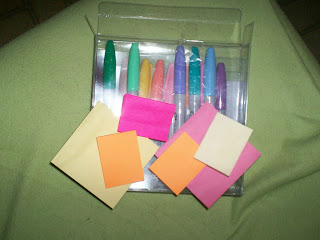 What I want to work out BEFORE storyboarding and writing that I HAVEN'T yet worked out... (hey, I have a week)

-The CLUES that the sleuth needs that POINT TO the suspects and motives.
-Elegant CONNECTIONS between suspects (and the murder victim) and clues so that there REALLY are only about 3 loops of what might have happened, even if a few of those loops are associated with a couple different suspects. It gets too confusing if there are separate strands for each suspect, and it is too trite if there is basically ONE motive that all the suspects share.

Once THESE are set, I write my clues (with who reveals them to whom or how they are discovered) on POST-IT NOTES!

They are multicolored—and pretty (see?), and I even have a rainbow set of sharpies to use with them!

How about the rest of you? Any more WriMos? Anyone have a PLAN?
Posted by Hart Johnson at 12:00 PM

I'll be participating as well. I did Nanowrimo and Bunowrimo as well as completed/won both, so I expect similar results this time around.
It tends to suit my style anyway but as for preparations, I have no foreshadwoing of what to do. The muse will strike and I will write.

Well seeing as my chapter by chapter file was on my first (and dead) laptop, I'm having to go from scratch. I've got the stuff posted you-know-where to use as a base, but really, it's not much to go on. I'm finishing work for two weeks on Thursday, so I plan to do a new chapter by chapter thingy so I've got somthing to work from.

James-nicely put! No foreshadowing... *snicker* As for me, I woke up dreaming clues...

Tara-I loved your first stuff, but I think with your greater experience, it may not be bad to start fresh--you will remember the key stuff, and the stuff that falls out, will be the less cohesive pieces.

Not doing NaNo but I do write with a storyboard.

I'm doing Nano as well. I don't plot like that but can I just say that I absolutely LOVE how GORGEOUS your board looks. It is so pretty it almost makes me want to ditch my anti-outlining ways and get with the pretty storyboarding!!

You put a picture of unused Post-its and Sharpies on this post! No fair...now I want to Storyboard too..and I don't do it!

Melissa-*giggles* I was resistent, but when I got my cozy mystery contract it seemed more important to get it a little closer to right the first time, as there is a deadline involved. I was shocked how much it helped. I still don't do them for my suspense stuff-those have more like a 'timeline' than an outline.

Elizabeth *teehee* Oh, the lure of office products to writers...

I never thought of storyboarding as a way to write/ organize a novel but this is awesome. I've used storyboarding for my visual- spatial learners as a way to analyze one particular scene or chapter in a literary work. I am going to apply this to my writing and as a way to assess students at the end of a unit.