On Shapely Legs and Ignoring them

[Okay, this post was written close to midnight under the influence of painkillers, when sleep was threatening to engulf me any moment. Wanted to delete it when I read it again in the morning, but decided to let it stay, because I am not sure Miss Goody Two-shoes can ever get more random than this.]

Legend has it that in Victorian times, tables and pianos were required to cover their legs so the sensibilities of the people viewing them would not be hurt. The lady tables and pianos had it lucky - they could drape themselves in lacy petticoats and velvet skirts, but since the tailors on Saville Row didn't take orders from the men, they were forced to go into hiding till gentler Edwardian times.

But all that applies only to the furniture that graced Victorian parlours. What about the shapely legs of furniture which hadn't yet left the carpenter's workroom? Did they flounce around in ragged petticoats and gingham aprons while they were worked on? And what about the débutantes who graced the showrooms? Were they allowed to lift their full white skirts to display their shapely legs to potential buyers, or were they only allowed to grant a discrete flash of leg?

And if the Victorians were such prudes about public display of slim calves and thunder thighs, how did they allow all the guests at a dinner party to get under their skirts without so much as a murmur?

Not having lived in corseted times, I can only conjecture. Or maybe I could ask these men- the way they are studiously ignoring the shapely legs thrust into their faces, they could only be time-travelers from that era. 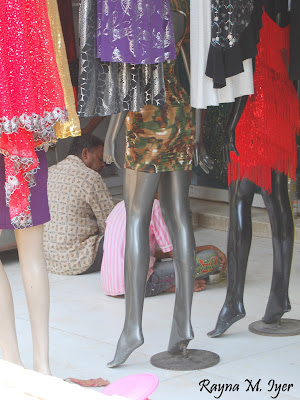 Random Question - Pink shirts worn by men - Hot or Not?

Haha, you're right - this WAS random. I had no idea Victorian furniture were such prudes, though it fits with the hidden sexual tension the rest of the Victorian society suffered from.

I'd forgotten that! I remember hearing that factoid in school--and we all rolled our eyes. Seems so nutty.

Pink on men? Depends on the man. Wouldn't look right on mine. :)

Rayna - Oh, what a fun post! To me it is so interesting to think about the different ways of looking at life in different times.

Pink on guys? Elizabeth is right that it depends on the guy. Mine's worn it once or twice and not badly, but in general? No.

Fun fact that I had forgotten.
Pink on guys? Some wear it like any other item, then it's ok. On those who are trying hard to send a message, not so much.

@ Mari- gotta love a man who wears a pink shirt because he left a red sock in his wash.
And how did you know I was once terribly irritated by a man in a pale pink shirt who kept showing off his Patek Phillippe?

@ Elizabeth- mine would normally not carry it off either, but he's blissfully unaware of what he is wearing, so it ends up looking okay. But I kind of like the lack of fashion sense shown by that kid in the picture.

@ Margot- the funniest thing in this vein is how Hollywood insisted on twin beds on screen.

@ Mary- that about describes my man.

Random indeed, but I love it! Great picture too. I think pink on men is hot...definitely bold and fresh!

Blessings to you Rayna!

HAHAHAHAHA! I'm not even sure if I KNEW this! What silly ninny-like furniture, not realizing the superiority of nudity!

As for pink... I'm a bit of a 'thinnist' here... I think most lean men can get away with it, but it looks ridiculous on a beefy or barreled chest. Though the local high school football players were all sporting pink for breast cancer awareness last week, and a man wearing pink to support an issue in support of women is HOT.

I only wear black shirts; hot or not; that's what I like >:)

@ Trudy- Thank you. And I guess there are as many opinions on men and pink as there are women!

@ Hart- I am not too sure if it was true, because class was also judged by the quality of the legs- the more muscular the better- but it sure makes a good urban legend.
And men wearing pink to support a woman's cause- that is definitely cool.

@ Cold As Heaven- considering I possess only one pink outfit in my entire wardrobe, and my possessing it made headlines (literally- FB status updates were full of nothing else for a few days), I shall not comment on your choice of colour.

@ Alex- she is a smart one is our Cruella. But why do you wear red socks?

I didn't know that about Victorian furniture legs! And as for pink on men, Elizabeth's right - it depends on the man. I think my husband might be able to pull it off, older son, not a chance, and younger son, a definite yes!

LOL. What a lovely little tidbit of fashion history! As to the pink on men...The Engineer would NEVER wear it. But when YellowBoy lost his ski goggles, he wore my pink ones no problem. I told him that only confident men wear pink. He bought that!

@ Belle- to be honest, I am not sure if they do wear clothes, but that's the story floating around, and I like it.
My kids wouldn't be caught dead in pink, but who's to say what the future holds.

@ Tina- that was a smart way to get YB to wear pink goggles!

@ Bedazzled- except on very few men who can carry it off, I have to agree.