Traffic. It's just one of those words that makes you want to hunch up your shoulders and go "BLARGH!", isn't it? And goodness knows that the rules and patterns of it vary immensely from city to city, country to country, and especially by the time of day.

Note the use of the word "Rant" in the post title. Yep, you got it - when it comes to certain trafficky annoyances, I turn into a real crankypants. (The Tart will tell you that all pants are cranky-making, but that's beside the point.) However, which things will set off my inner Masshole vary wildly by where (or even whether) I'm driving. Let me remind you that I live in Boston - a city where the joke has it that the roads are simply paved cowpaths. While that may be a slight exaggeration, it's certainly fact that right angles are few and far between, rotaries (they're called roundabouts most other places...) are plentiful, and you can drive straight down what you think is just one street and yet have it change its name three times in four miles.

For example, say I'm setting off on a Target run, something that takes place every couple of months. The way to the nearest one goes through some pretty rough neighborhoods (in a few cases, that's putting it very kindly), and you're taking your life in your hands just trying to navigate an intersection where the rules seem to be "whoever peels out the fastest has the right of way". Even if they don't. Which (surprise!) is usually the case. Trying to anticipate every person, their (lack of) knowledge or (equal lack of) caring of the rules of the road - it's nerve-wracking, to say the least. Driving defensively? Oh hell yeah. It doesn't help that the buses seem to think they always get to turn first at every intersection, no matter whether they're turning right or left (I admit it, I've been tempted to let one smush me when it's trying to take a left while I have the right-of-way... but I've always chickened out). In any case, people who usurp the right-of-way are dangerous. And they make me mad.

However, I teach in a very affluent suburb of Boston - so you can all picture it, let's stipulate that every other car is at least an SUV, and you'll actually spot ridiculous things like Hummers and Land Rovers (seriously, folks, tooling around town does not actually require a vehicle designed for warfare or safaris...). My pet peeve here? People who yield their right-of-way. They think, "oh, I'll be nice and let this person go" - which ends up causing more problems than it solves, usually because someone behind them, who can't see around them due to the aforementioned massive size of their vehicle, will cut around and (hopefully) narrowly miss slamming into the person who was just "allowed" to enter the traffic stream. Or you need to cut across both lanes of traffic, and someone leaving a spot for you in just one doesn't do any good - but they get all huffy because you don't take advantage of their generosity in allotting you a hole. This also makes me mad.

What both situations have in common is subverting the accustomed and predictable patterns of traffic. At least, predictable by the rules we were supposed to learn in drivers' ed, commit to memory, pass a test on, and continue to follow for as long as we are legally licensed drivers - yeah?

Shall we have a bash at the stereotypes? The crazy taxi drivers, perhaps? They're an international phenomenon, in case anyone was wondering (it's not a coincidence that one of the Italian sentences I remember learning translates as "if you don't slow down, I'm going to puke"). I have a friend who was born and raised in Taiwan who insists that Asians really are lousy drivers, herself included - though she asserts she's better since her daughter was born. I don't even want to talk about the fact that it seems to be necessary to pass laws making texting while driving illegal - shouldn't that be a no-brainer? Drunks behind the wheel, ohhhhhhh, don't go there. Old people? There were certainly a rash of news stories last year about senior citizens doing everything from mixing up the gas and the brake (which, to be fair, one of my 16-year-old students admitted to doing as well) to smashing into storefronts or pedestrians in crosswalks.

What about the speed demon hot-dogging it down the left lane? It's one thing on a freeway, but it's thoroughly stupid on a road where you might get stopped at a signal two blocks down, having made the grand gesture of getting stuck there moments before the person they just blew past. Then again, the ones who are really dangerous are the ones who go well under the speed limit - they're even less expected, and you frequently run up quite close behind them before realizing how slowly they're actually progressing. Stopping where there's not a STOP sign? Bad. Not stopping where there's a crosswalk? Also bad. Pulling random U-eys in front of the train station? Bad. Blocking an intersection so that even when the light changes, cars from the cross street can't enter? Really bad. Tailgating? Bad. Slowing down when you're being tailgated? Errrrrm...

And then there are those places where they insist on driving on the left side of the road. You know, Great Britain, Ireland, Australia, Japan... they can get away with it 'cause, duh, they're islands. Don't get me wrong, I actually prefer it that way - despite having lived my whole life in a country where we drive on the right, and having previously only visited countries that also drive on the right, it only took me two days to flip all my perceptions when the Burrowers invaded the UK. But it took me two weeks to feel comfortable on the right again when I got home. (I'm going to get yelled at for avoiding the fact that places like, say, India and Nepal also drive on the left - or, at least they're supposed to... I hear that the easiest way to commit suicide in Kathmandu is to take a walk anywhere near a road.)

Now, despite the fact that I came awfully close to being guard-rail pizza today (giant SUV ignoring a YIELD sign... apparently those don't apply when your car weighs over a certain amount...), I feel lots better just for having ranted. It's like I keep saying, people are like microwave food. Ever read the warnings on the containers? The ones that say "May explode if not properly vented."? So go out and behave on the roads, people - after all, you never know when some eidetiker like me is looking at your plate number... 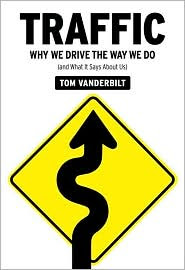 For further reading, may I recommend the excellent and thought-provoking (and aptly named) Traffic by Tom Vanderbilt.
Posted by ViolaNut at 12:00 PM

And here I was thinking India was the land where no rules of traffic apply- it seems to be endemic.

And you mean to tell me people actually drive on the right side of the road?????? How could they?

Oh, man! It was such a hard transition moving to Michigan after oregon. Did you know the 'stop at the cross walk' thing has one state that doesn't DO IT? You got it. In Michigan, car is king. Distance between cars on the freeway? if it is a whole car length, a car will GET IN THERE. I think Oregon drivers are pretty good... courteous, follow laws... but here they are TERRIBLE. (though, it sounds, perhaps not as bad as Boston)

Boston sounds terrible! Just the other day I had a run in with a little old lady driver in a construction zone. I was in the middle of a line of cars, four or five in front of me, four or five behind, when all of a sudden everyone in front of me started pulling way over to the side, even though there WAS no side of the road, and here comes a little old lady, barely visible over the steering wheel driving on the WRONG side of the traffic cones, as far to the right(her left)as she could possibly be. It was scary, and I don't think she even noticed the line of cars she was very close to be crushed by.

I drive in AM and PM rush hour every day. I hate trucks. I hate Access-A-Ride vehicles (ambulettes that transport the sickly or elderly, the drivers are horrible) and I absolutely abhor taxi cabs.

Don't get me started on the potholes.

Natasha - if I remember correctly, there's a whole chapter in Vanderbilt's book about how wacky driving is in Delhi. ;-)

Tami - seriously? No "Stop for pedestrians in crosswalk" signs all over the place? Dude. The Big Three have a LOT to answer for. :-P

H.B. (Maria?) - don't get me started on little old ladies (or little old men, for that matter). For some of them, "oblivious" doesn't even come close.

Chary - ARGH, how could I forget potholes?!? Then again, most of 'em are fixed right now, since we haven't had the newest spate of frost heaves yet. :-P