If you like to carefully and meticulously read science fiction, or haphazardly skim science journals, you'll eventually be wondering: How can I travel backwards in time?

Long answer: It depends on what you actually mean. Different works describe some wildly different actions as "time travel", so I'm going to break down the ins and outs of what's actually (allegedly) happening in several scenarios.

If you'd like to follow along at home, the first step is to create your own universe. I recommend using a chessboard. It has well-defined causal relationships and a finite number of discrete states.

Note that the universe you're creating is real, but it is not equivalent to the physical board and pieces. The physical pieces, for example, could be shaved or nicked to alter their mass; they could be placed astride several board squares to alter their position. Those values are relevant to the original universe, but in your universe they are analogous to the disallowed energy levels between discrete electron orbits. Make sense?

Also, it is recommended that you make like a Persian rug-weaver and deliberately include some imperfections, lest the Almighty take your act of creation as a challenge to Him.

So, this is what my universe looks like through eight iterations of Planck time: 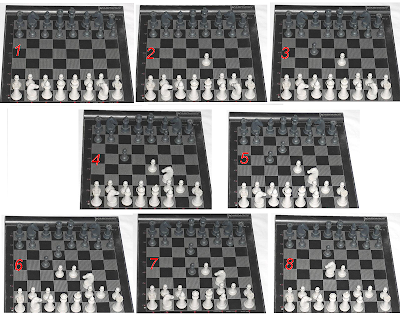 A few respectable, rational scientists are also geeky fans of science fiction. And by "a few" I mean "almost all of them", assuming we're talking about physics and astrobiology and not a bunch of boring, so-called "sciences" like psychology and linguistics.

So it was inevitable that they would investigate the possibility of time travel, or at least plug some ridiculous numbers into Einstein's equations. The latter dictate that one's temporal frame of reference is affected by velocity. You know this already, right? As an object approaches the speed of light, its clock runs more and more slowly. If something (probably light) moves at the speed of light, its "clock" will be stopped.

The catch here is to consider that, from the perspective of the "normal" relativistic traveler, the rest of the universe runs faster and faster into its own future as he approaches the velocity of light. Theoretically exceeding that velocity won't get him into the universe's past, just his own past. Demonstrated in our synthetic universe, it looks like this: 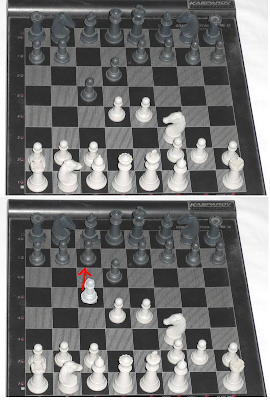 The tachyon pawn (tachypawn?) slides into its own past. This violates conventional wisdom, but it doesn't give the pawn access to past events. If you could do this to yourself under sufficient isolation, you might reverse aging, but you'd also be undoing your own experiences and memories.

In many ways, the J.J. Abrams variant is the simplest form of time travel. It has no difficulty with paradox because no entity actually travels into its own past. Instead, there is a multi-verse of parallel universes, and what seems like backwards time travel is really just a sideways jump into another universe that looks exactly like yours did a few centuries ago: 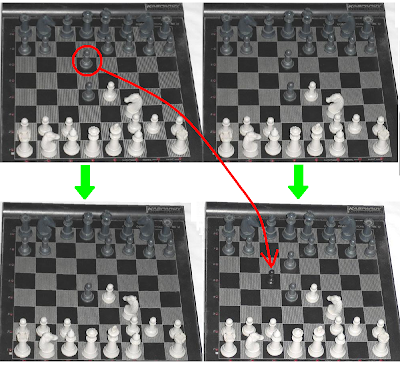 By relocating to this new universe, you can hang out with its version of your younger (or older, or same-aged) self. That creates something of a social burden to work for a better universe, however, lest people start noticing that the universe that went to hell just happens to be the universe that got two yous.

First, to be fair, this innovative type of time travel appeared several years earlier in Bill and Ted's Excellent Adventure. But I'll use Potter as an example because the events are a bit simpler to break down.

This so-called time travel is remarkable when you step outside the perspective of Harry & Hermione (the two who use the Time-turner). Not only does everything happen only once, it happens only one way. Harry does not change the past between 8:55 and 11:55, he only takes actions which are necessary to coincide with (what he perceives as) past events. Ergo, it is less accurate to say that Harry traveled in time and more accurate to say that he was duplicated (or split) at 8:55 and then un-duplicated (or merged) at 11:55. 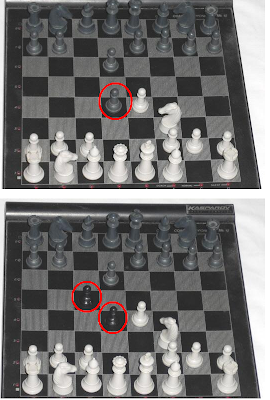 Granted, this poses a few sticky questions. For starters, how does Harry #2 have memories of future events? And what would happen if Harry #2 failed to take certain actions, like saving himself from the dementors?

Short answer: Maaaaagic. Long answer: It's all predestined. While predestination might be implausible in our own Heisenbergally Uncertain universe, it has perfectly valid internal logic. It's also a fairly common feature in fantasy literature, where prophesies foretell future events with uncanny accuracy.

And if you really, really want to maintain the idea that Harry had some measure of free will in his universe, just keep in mind that the Time-turner operates over a limited span and Harry's decisions need not be conscious or immediate. The magic of the Time-turner must have calculated possible futures, and then probed Harry's (and Hermione's) souls for subconscious decisions by 8:55, whereupon it concluded that they would use the Time-turner three hours hence, and thus it affected the duplication. For the next three hours, Harry and Hermione (both versions) did not make decisions, they only took actions to understand them. Like Neo in the Matrix.

Whereas alternate timelines are simple, and predestination can be elegant, the most popular depictions of time travel are neither. I could call them "impossible", but that'd be a cheap cop-out. After all, if I can imagine witnessing-- and making some sense of-- the events as presented, I should be able to imagine some internally-consistent causal mechanisms, even if they violate known laws of science.

In common Hollywood time travel, the universe's past history is really a series of parallel universes with some causal relationship. Imagine that spacetime is a building, constructed not from the ground up, but hanging from a great ceiling: 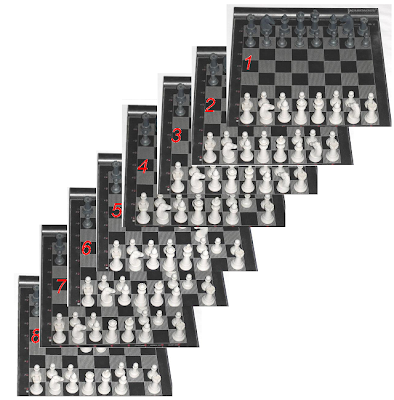 The past is the foundation, but I placed it at the top because it cannot (normally) be affected by fallout from the future, but it is still the foundation on which the future depends. Also, for the model to work, we should imagine that all elements have infinite load-bearing capacity and we should imagine that each element has some downward growth potential depending on whether or not something is already below it. Like snotites:

Snotites make a good metaphor. Higher up is back in time, it is generally unchanging, and unaffected by growth below. If a super-entity clips an ancestral line, all of the descendants plunge into the abyss. This then creates a gap which might be filled with new growth from the same line, or growth from a neighboring line.

In Back to the Future, when Doc Brown invents his time machine, he is like a snotite bacterium that's learned to fly. No longer limited to affecting events downward, he can now access meta-time (which would be "normal" time in the snotite/building metaphor). When Marty travels "back in time" (toward the ceiling) to witness his own ancestral line, they are in a pristine state, but his presence alters the "past" (higher-up snot) and thus alters his own "future" (snot near the bottom).

In the film, Marty starts to fade out of existence as he threatens the status of his own ancestral line (by interfering with his parents' first meeting). Presumably, had he failed to set things right, Marty would have disappeared altogether. This seems like a paradox (no Marty = no Marty to interfere = yes Marty), but let's play by the film's rules, shall we? To make the metaphor work, we need only assume that the Marty-snot is still dependent on its ancestral line for nutrient flow (a long, thin umbilical, perhaps, leading from his original position to his current position).

So, if the film had not had a happy ending, we could describe events from the perspective of meta-time thusly:
(1) Marty's parents meet.
(2) They copulate and produce Marty.
(3) Marty travels backwards in spacetime (not backwards in meta-time).
(4) Marty screws up the "past".
(5) The damage reverberates down the timeline, altering many things, including that which sustains Marty.
(6) Marty dies. He dematerializes instead of keeling over because the sustenance wasn't caloric, it was something more exotic.

In short, Marty's parents did meet & marry, Marty was born and lived, but he accidentally killed himself in a completely non-paradoxical way.

The good news here is no Back to the Future II. The bad news is that normal time is purely an illusion, so there wasn't any time travel. There exists a strictly causal meta-time wherein backwards travel is still disallowed.

In the pre-existing, non-chessboard universe, access to stuff that looks like time travel depends on who you are:

Parallel Universes - All of the above

But for any sort of temporal relationship that's defined by causality, backwards travel is nonsensical because, duh, causality.

Now, the one that got on my nerves was Margaret Mahy's Maddigan's Fantasia. There was some seriously wonky time travel in there.

PoA, I was terribly drunk the first time I read the time-turner sequence. Made it even cooler. ;-)

The PoA time sequence was well done, and it was something I could relate to, because nothing is changed- things are only enabled.

There is a fantastic short story of Asimov's on time travel. Can't for the life of me remember the name (maybe it was Neanderthal Man?), but I loved how it ended.