Delusional Thursday: Of Piracy and men in Pink

You are JK Rowling. You have just landed in New Delhi after a grueling flight. It took you more than an hour to clear the customs and immigration formalities. Never a very public person, you are not looking forward to the party in your honour at the British High Commissioners' residence - plastering a smile on your face always leaves your facial muscles sore for a few hours. You want nothing more than a steaming cup of coffee, and to stretch out those back muscles for a couple of hours. You are dreaming of the hotel room, when the car you are travelling in grinds to a halt at a traffic jam.
Almost by magic, a boy materialises at the car window, and thrusts a book with a suspiciously familiar cover at you.
"Madam, yeah book leh lo," he says. "Bahut acchi book hai."
You turn to your interpreter. "What's he saying?"
"He's trying to sell you the book," your interpreter says, before rolling down the window and asking the guy to move on.
The boy refuses to budge - he can sense interest better than anyone else. "Bahut acchi book hai. Sab log pad rahe hain. Aur bhi char books hai isi author ke." He pulls out all the other books and thrusts them at you.
You turn to the interpreter, she shrugs, and tries to shoo him away.
"Bahut acche book hai. Sabse fast moving," he persists.
The interpreter threatens to hit him, but you restrain her. "No, don't. I want to know what he is saying."
"He's saying your books are very popular. That everyone is buying them." She turns back to the youth. "Go away, or else..."
"Ask him how many copies he sells?" you ask your interpreter. She reluctantly complies.
"Every day five-six," the boy replies in broken English. "Very good book, Madam. You buy?"
He looks so hopeful that you can't resist. You pull out a couple of pound notes and thrust them at him. "Thank you," you say. It may be pirated books that the boy is selling, but what he says about the popularity of the books is music to your ears.
Urban legend has it that JK Rowling did indeed buy a copy of Philosopher's Stone from the guy at the traffic light. She insists she only got her picture taken with him. I tend to believe her, because however rich and famous she may be, which writer would want to condone piracy by picking up a pirated copy of her own book?

Jeffery Archer, who visits India once a year to coincide with the release of his latest book, insists that the measure of an author's popularity in India is not the official sales figures, but the number of boys hawking the book at traffic lights. He definitely knows what he is talking about - when I was looking for a copy of "First Among Equals" a few years back, I found it not at any of the three bookstores I searched, but at a pavement bookstall selling pirated books. 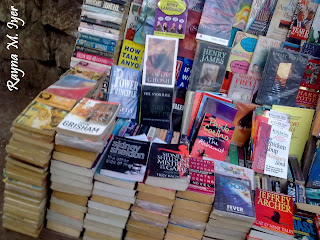 Book piracy is a big issue in India. And not without reason. Books, even paperbacks, are EXPENSIVE in the country. A boxed set of Stephenie Meyer's Twilight Saga costs Rs. 1,599/-. Pirated copies of each of the three books can be picked up for Rs. 100 at any street corner or traffic light. Give me one good reason why anyone would want to buy an original?

But the economics do not always work out. Chetan Bhagat's mega popular "Two States" costs Rs. 95 for the original and Rs. 65 for a pirated copy. Once you bring the book-distribution economics into the picture, the gap narrows even more. Wholesale retailers typically make a margin of 30% on the book- if they pass on even 25% (as many of the online booksellers did), the cost differential between the original and the pirated copy becomes as low as Rs. 5. Why would anyone want to buy a pirated copy when an original costs a quarter of a bar of chocolate more?

Yet, pirated books rule. Simply because of a much better distribution network. Commuters in India spend more than an hour a day at traffic lights - buying books is a more productive way to use that time than sending yet another pointless text message.

Which brings me to the obvious question - why hasn't anyone come up with a business plan to bring the vendors of pirated books into the official bookselling network? Wouldn't that be a Win-win for everyone - most so the Writer?

In case you do not think my plan delusional enough, here's something else.

Last week, I had posed the question - "Men in Pink. Hot or Not?
The results were interesting to say the least- some said yes, some said no, and almost all said it depended on the man. Mari, though the first to post, summed it up best- "As for men in pink shirts, I say it is a tie. 33,3% HOT for guys who wear it either because they have a sense of fashion, or because they wear it like any other piece of clothing. 33,3% NOT for men who wear it because they think they have a sense of fashion, but in reality all they want is to show off their Patek Phillippe. And 33,3% ADORABLE for those who simply put their white shirt in the washer with a red sock..."
Mari rocks in her bright red socks, and she also gets first shot at the next question - "Men in Pink. Who's hotter - man or mannequin?"


Photograph of JK Rowling taken from Goodreads, other photographs are self taken.

I never really thought much about pirated books. I have to think about this.

good one, Rayna! This has been on my mind for ages... I used to love all those stalls at Fort and used to regularly haunt them, but always hesitated to pick up books there... though they had books which no bookstall ever stocked! It was such fun to just go there and browse. and i really miss them now, every time i go there, the place seems so dead! if only as you say, we could integrate them with the legal system, books would be so much more affordable... even now, i cant get most of the books i want for samhith just because neither crossword nor landmark stocks them,and those which they do stock are just too expensive for me! if only those fort chaps were still there, i am sure i would be able to lay hands on those books!!

Haha - MAN! The mannequin looks slightly like one of those PP-watch guys, actually...

As for the piracy - this fascinates me to no end. Here the book business is extremely regulated, and you won't really find anyone selling anything on the streets. I think it might be illegal (except sex - prostitution was legalized a few years ago, though buying is still illegal. The whole thing was an attempt of recognizing the real victims of the crime, the prostitutes, but so far it does not appear that they have gained much. But I digress).

I agree that piracy of any kind is undesirable, but in a way it is a shame that the effect of reducing the piracy is that the book reaches fewer readers. I think your solution sounds absolutely marvelous (though unfortunately probably a little delusional).

Yeah-I would LOVE to see a system formalize the street vendors, though presumably, the price would go up likewise... but if, as you say, they have some BOOKS other places don't, and people are stuck in TRAFFIC anyway... it seems a great way to go about sales.

And yes. Man. The mannequin is trying too hard.

@ Jennee- I didn't either, till I started working for an organisation that worked with some of those vendor boys.

@ Anu- so true. My son would be around the same age as Samhith is, and Landmark and Crossword just do not have the books I want at a price I can afford. If books were cheaper, they would actually end u making more money through increased sales.

@ Mari - he does, doesn't he? You can't see, but he even has briefs with the brand prominently displayed on them peeking out.
And I do understand what you are getting at about the victims of commercial sex. They are trying to do something similar in India too (where the whole thing is illegal), but as I see it, till you give them an alternate livelihood, there is not much you can do.

@ Tami- it is Delusional, isn't it? But would you believe I actually wrote to the CEO of a publishing house last year, with a short summary of a possible business model. Even heard back from him- he said it is feasible, but only if someone organises the vendors. Ah well!!!
And needless to say, it was your comment on the Monday post that catalysed this post.

It seems like giving the vendors some legitimacy by providing them with real books from a publisher would be a great plan!

Seems piracy of anything is a sign of the times... I admire a man who wears pink.... mannequin or man.

Rayna, congrats on being part of such a wonderful blog. Thanks for referring me here from your blog. I LOVE the title!!

@ Donna - not many can carry it off, though.

Hurray for men in pink...