Every morning, I place my iTunes on shuffle because I need some type of motivation to get my butt to work. Don't get me wrong, I love my job. It would just be easier if I could be there at 9:00 a.m. rather than 7:30 am. This later start time would mean that I could leave home and travel to the city while there is daylight rather than the cold bleary darkness of the wee hours of the morning.

I have a little over 7,000 songs on my iTunes, ranging from the 1950s to the present. Today I had a feeling for the 70s. I sorted the songs according to release date and clicked play. KC and the Sunshine band began crooning to a familiar song from my childhood. I had no idea that KC and the Sunshine band sang "That's the Way (I Like It)." First of all, I thought this was a song from the early 1980's, since I used to play patty cake in the school yard with my friends using this very song. 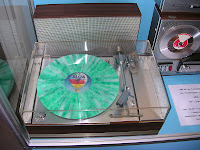 Second of all, I never heard my mother play this record on her record player. Remember those? The square box that played circular, plastic discs placed on a flat, spinning circle, with a long rectangular appendage that has a needle on it. I remember stealing the little red plastic disc for 45s and playing skellsies (an urban game played with bottle tops, filled with gum, and knocking your opponent out of a large chalk-drawn grid), then getting grounded when she wanted to play a record. 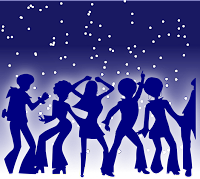 But I am going off on a tangent now. Music is more than just beats put together with vocals. For me, music is an irrefutable connection to others, it is a way of identifying those feelings that I thought were lost, and finally, it is a sentient entity that transports me to a different time and place. I often hear these songs and think of my mother with her bell bottom polyester pants, tube top and her high heeled wedges. She would pick her hair out so it looked like one big puff ball. I remember the aluminum foil covered ceilings and the brightly colored moons and stars on the living room walls. Yup, my mom was definitely a Disco Diva.

And in reverence of my mother's eclectic tastes in 1970's music, these are my ten top favorite 70s songs:

Mommy, this was for you!

What's your favorite song of the 1970's? Was it the Bee Gee's Staying Alive? Or perhaps Walk This Way by Aerosmith before they mashed it with Run DMC's rap? Share with us, we would like to know.
Posted by Shaharizan Perez at 12:00 PM

Excellent post, Chary! Love your take on music, and I agree with you - it's so much more than rhythms and tunes! I have copied off your playlist, and I'm looking forward to listening to it. Most of these I know, of course, even though they are all older than me ;)

My favorite song from the 70s is probably Stairway to Heaven by Led Zeppelin. The first time I heard it, I was reading The Hound of the Baskerville, so whenever I hear the song it reminds me of Sherlock Holmes >:)

I love music as well and use it to inspire me all the time.

You don't even WANT to know how much music I have... it scares ME sometimes.

@ Mari- Yay! I love these songs. Happy to hear you know them. I was a kid when most of these came out.

@ Cold as Heaven- Isn't it amazing how one song can bring up so many memories. Great bands by the way.

@ Melissa- I was so in love with John Travolta in staying alive. It's a shame Andy Gibb is no longer with us. I loved the Bee Gees too even though I couldn't hit those high notes.

My favourite 70's songs fall into two categories- the ones I grew up with, and the ones I discovered in the 90's.

In the first category would be By the Rivers of Babylon and lots more of Boney'M and Dancing Queen & I have a Draem and lots mroe of ABBA.

Gosh Chary, I do understand your lack of enthusiasm for leaving the house in the early morning hours. That certainly contributed to my decision to retire!
As for the playlist, yours is quite a nice reflection of the 70s. R and B was played alongside rock on the radio. I loved the Bee Gees 'More than a Woman', Anything by Pink Floyd, Joni Mitchell's Clouds album was a 'folk/rock' favorite, James Taylor's "Fire and Rain", Marvin Gaye's "What's going on?" Some might be late 60s. I still listen to rock and I am probably a lot older than your Mom!!

@ Rayna- How could I forget ABBA? I love Mama Mia! And Bohemian Rapsody.. . I so love Queen too.