Erm. Apologies to Sir Mix-a-Lot. Seriously though, when it gets all wintery outside sometimes the only thing I want to do is curl up with an enormous book and live in it for a while. And since I read VERY fast, and sometimes New England storms can last a day or more, when those big fat books are part of a series and I can bury myself in them for the whole thing - as long as the lights don't go out, I'm in heaven. So here are my snowbound reads, in no particular order except for the first, to whit:

This one's first 'cause I stole the "Big Books" thing from her blog. :-) There is pretty much nothing I don't like about this series (other than the wait time between installments, that is!). They're funny, they're well-written, they're HUGE, they're Scottish (you knew that was coming), and they are utterly unclassifiable beyond the catch-all label "fiction", 'cause we've got history and romance and time travel and medicine and politics and, not least, lots and lots of kilts. Yum. Spinoffs like the Lord John series and various shorts found in even-more-various anthologies can help bridge the gap between the main entries; she also has something called "The Methadone List" on her blog that contains suggestions for things to read in between releases. :-)

estions for a "Big Books" display), but since these were some of the few books my dad had in the house when I was a kid, they did snow-day duty for me in junior high so why not add them in? I would probably read them much differently now (for starters, I went to college with a heaping pile of people from that part of the world, so I understand more of the customs {and swear words} than I did as a 12-year-old) and should just suck it up and buy the series for myself one of these days. Anyway, multi-generational storylines, westerners in the Far East, opium and pirates and all manner of crudity (I'm surprised my dad let me read them, actually... then again, I'm not sure HE read them...), the writing's not always polished but sometimes I just don't care.
Earth's Children - Jean M. Auel

Yeah, I know, caveman sex, whatever. They are BIG, there are SIX, and they got me t

hrough some boring high school snow days (or the first 3 or 4 did, anyway), so they go on this list. :-) For those who have themselves been living in a cave for the past 30 years, the series focuses on a Cro-Magnon girl and her life circa 30,000 years ago, from being orphaned in an earthquake around the age of 5 and adopted by a tribe of Neanderthals, to her later travels with a man of her own species with whom she falls in love. While scientifically much of the story is debunkable (for example, recent research indicates that blue eyes are a recessive mutation only 5-8,000 years old, despite a character in the 6th volume remarking that nearly everyone has blue eyes), and the aforementioned caveman sex is seriously over the top in at least 3 of the 6, they definitely fit the escape criteria to a T.

Anything by - Phillippa Gregory

So once again the history's a little suspect and the romance perhaps a bit over-the-top - these still make great blizzard reading (I know this because I bought three of 'em in hardcover for half off back when there was still such a thing as Borders, and proceeded to read them all during {you guessed it} a blizzard). Most people know The Other Boleyn Girl, but she has a good dozen more that certainly make the cut, some of which are based on actual historical figures and some of which are wholly original creations. There's the set dealing with the Tudors and their associates, there's the Wideacre trilogy, and others focusing on topics as disparate as gardening and the slave trade.
Harry Potter - J. K. Rowling

Well, duh, this had to be in here somewhere. Seven big old escap 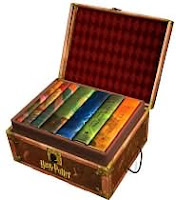 es (pictured here in a nice neat box, how lovely). My dear old friends, having been read and reread and discussed and dissected and analyzed and (in the case of most of my fellow Burrowers) expanded upon and/or rewritten, and I still love them. Anything that can stand up to that kind of treatment is a total keeper. If there's anyone reading this who doesn't know the basic story line (or, let's be honest, can't recite large hunks of the text verbatim and pick out word errors in the audiobooks {errrrm... or is that just me?}), you should really not be reading this blog post, you should be reading Philosopher's Stone! (Yeah, I know I'm in the US but the original title just makes so much more sense.)
The Inheritance Cycle - Christopher Paolini
Maybe a bit flawed, maybe a bit under-edited, but really big and full of dragons, so it totally fits today's criteria. I've mentioned this one before, but since then the

long-awaited fourth and final volume has been released, so I'll focus on Inheritance. We finally have the wrap-up to this epic, and it's definitely a wrap - all storylines brought to a satisfying close by the end. I've noticed a trend in first-time authors writing trilogies (and quartets, as this turned out to be) - the final volume is much bigger than the others because the author underestimated how much wrapping up was needed. Paolini underestimated so much that the final volume turned out to be two volumes (Brisingr and Inheritance), and there's a considerable amount of story left even after the grand dénouement. (Angela, as always, remains a bit of a mystery.) Epic battle scenes, lots of strategizing, and of course, dragons dragons dragons!
Otherland - Tad Williams

ferred escape from the trials of real-world life... at least until people start falling into comas upon entering. A diverse and fascinating band of adventurers are searching for answers in this scifi/fantasy hybrid, including South African Renie (whose brother is one of the comatose), her student !Xabbu, a Bushman, an American teen with progeria, and - oh, forget it, this series is so massive that no summary can possibly do it any justice whatsoever. Just read them all, in order, and you'll see what I mean (and when you're done, try Diane Duane's Omnitopia - similar concept, different style).
Chronicles of the Cheysuli - Jennifer Roberson

The two-books-in-one-volume omnibus editions I have of these are bricks, but

the story is awesome and you don't notice the number of pages flying by. It's one of those multi-generational, prophecy-driven high fantasy epics which I just adore, but for some weird reason not too many people seem to know about it. Warring factions in the land of Homana make it a rather inhospitable place for the shapeshifting Cheysuli; invaders from neighboring Solinde and Atvia are wreaking havoc and the prince of Homana is exiled. The saga follows the long line of descendants of both the Homanan royal line and that of their sworn enemies, a race of sorcerers known as Ihlini. Fortunately, family trees are provided. I admit it, I read these in the summer, but they're an amazing escape and perfect for being snowbound.

, I am a massive Python fan AAAAAAAAND I got to meet him at a book signing for the first one, but still!) Okay, so if you're NOT a Python fan you probably won't care, but what the hell are you doing hanging out with us Burrower nuts if you're not a Python fan? ;-) Anyway, the first volume covers 1969-1979 and contains tidbits from the main Python years (in fact, that's the subtitle - The Python Years), while the second (Halfway to Hollywood) takes care of 1980-1988. While they certainly don't contain every word he wrote in those time-spans, they do contain a plethora of behind-the-scenes tidbits for everything from Python and Ripping Yarns to Brazil and A Fish Called Wanda, much information about Palin's personal life - wife, kids, parents, sister - and the simple minutiae of the everyday. He was cool enough to sign my copy on the page with the entry for my own birthdate - this is possibly because I'd handed him his fresh pint, which had been passed to me as I approached the signing table. :-)

The Baroque Cycle (or anything else by) - Neal Stephenson

A departure from his more usual cyberpunk (but with ties to Cryptonomicon), this is a massive trilogy that'll see you through any snowstorm and keep you thinking for quite a while afterward (for starters, there's a whole subplot on the Newton vs. Leibnitz calculus mess. Yep, I said calculus. In the same novel with pirates. Deal.). These are books to be savoured, digested, and pondered, with a huge cast of characters (both historical and imaginary) and more topics than you can shake a Shaftoe at (that being "Half-Cocked" Jack Shaftoe, if you're wondering). In case you get hammered with a real thumper of a storm, you should also have a few of his other books on hand (Snow Crash and The Diamond Age being two in his more "usual" style, while the latest two, Anathem and REAMDE {Read Me with a typo, get it?} skew off again. The only thing you can expect from Stephenson is the unexpected...Inspector Lynley Mysteries - Elizabeth George

Yeah, I've had these on here before, but they're such great escapes (besides, our shared birthday is coming up AND she just had a new one released {pictured}). Though

set in the UK and with bona fide policemen (and -women), they're neither cozies nor police procedurals; on the contrary, they tend to be rich character studies in which the actual murder(s) sometimes seem almost irrelevant. This time, Lynley is called in to look into the death of young man in a case where murder isn't even officially suspected. You know this is not your usual upper-class family as soon as toilets are mentioned (the Faircloughs manufacture them, you see), and as you meet the twin daughters and the returned prodigal son, it is quite clear that all is not quite - well, quite. Throw in the disturbed son of the (possibly) murdered man, a bumbling 6'8" redheaded Jewish reporter, and some decidedly 21st-century medical procedures, and you have a rich stew fit to see you through quite a whopper of a blizzard.

More lovely high fantasy, and with the trilogy recently completed you can lose yourself in this world for days if you read slowly enough. Some of you may know

that I'm terrified of flying; the first one of these got me through a flight from California back home to Boston with only a couple of mild freak-outs, so you know they're engrossing. Anyway, the world-building is superb, the characters are real and flawed and all those things characters are supposed to be, and there's a fantastic science-vs.-magic thing going on at the core of it that just makes my geeky little heart go ZING! The point of view character switches with each volume, so the voice never gets stale, and there's intrigue and conspiracies and people who are (duh duh DUN!) not what they seem. That's all I'm saying - you need to discover these for yourselves.

Hah! Thanks for the giggle on the Sir Mix-a-lot reference.

I'm an Outlander fan too so will be checking out some of the others!

Thanks for alerting us to these reads. Neal Stevenson is always amazing.

Ha! Always we can rely on you to give good recommendations... the problem is finding the TIME to read them.

Johanna - yeah, sometimes I can't resist. I hope you find more things you like on this list!

Catherine - indeed he is. Sometimes puzzling as all hell, but always amazing.

Tara - I keep telling you, sleep is SOOO overrated. ;-)