The Beauty of the Fool

So yesterday I was in the midst of a Facebook conversation, where all great mind rushes seem to start, yes? And somebody pointed out the Jon Stewart, Stephen Colbert fact of the day... they... the comedians... seem to be the only source of truth these days...

But this is not new. During the great European monarchies it was the Jester, the Joker, the Fool... those were the only people who could say the great truths without risk of execution by the king. Because of this, Shakespeare used them fairly frequently—they were both a historically accurate detail and a brilliant plot device. Some fools even acted fool, even while they manipulated their masters. Rumor has it Terry Pratchet's Discworld series uses this device—I have had these on my list forever, but my local library selection is either bad, or the books are too popular—I have trouble getting ahold of any at all, let alone the beginning.

Who is Eligible to be the Fool?

You know, I am not sure I think the fool works as an MC, because I don't think the reader can be in on their inner workings. I think the fool works best with a note of surprise. They should shock us. Or else they should make us laugh so we underestimate what they say, having it hit us only later. I suspect Terry Pratchet would make me eat my words, and a fool intent on actually controlling things would be a different sort of character—capable of carrying a story. Mostly, though, rather than a literal fool, I like a sidekick—a close friend willing to give uncomfortable truths and add some humor to an otherwise darker tale.

I've written such a character for my cozy mystery series. Much of the humor is in the form of Annie Schulz, BFF to my MC. And Annie speaks with my Tart voice, advising the heroine to do such things as 'go grope your boyfriend, or I'll have to do it'. But at the same time, she is the strength behind the MC. 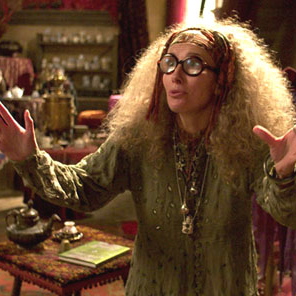 Other likely fools however, can appear in surprising places. Consider the strange case of Professor Trelawney. She is an out of touch fruitcake, yes? I used to be fond of the saying, 'she has the sight, but hasn't a clue.' Meaning she could see the future, but was lousy at interpretation. This essay does a nice job of summing it up. Though the essay misses one of the big interpretations:

Sybil comes and thinks she makes thirteen. But in fact there were already thirteen at the table before she got there—Peter Pettigrew is in Ron's pocket... and then ALBUS rises to greet Sybil. So in fact her prophecy is TRUE. She just applies it wrong.

And it is things like interpreting the Grim as death that make us not trust her, when it is not a Grim at all, but Sirius, she is seeing. Note she gets much better at interpretation as things get darker—by the Half Blood Prince almost every prediction she makes is accurate, if sherry doused.

Trelawney is a brilliant fool. She is so easy to dismiss. And yet it is her prophecy that sets the entire story in motion—Voldemort ACTS because of what she said, and by his acting, makes it true.

I love the idea that because they are funny, the fool can tell readers things they need to know in a way that they will still be surprised when they prove to be true, later.

What about all of you—have you ever used the fool to enrich your tale?
Posted by Hart Johnson at 12:00 PM

The fool is a very important part of my inner life. I've been reading the tarot for forty-four years...the fool, in her innocence and purity, in her goofiness and sublime adventure-desiring way, can lead us into the deep wild woods where all answers lie. Or truth.

I'm very fond of the fool too. Potential. Anything from here... I've always loved starts.

Sybil Trelawney is a perfect fool, just like many of Rowling's characters so perfectly fit their roles. I'm having a hard time picturing a fool as a protagonist, but I bet if someone could make it work it would be a fun story.

LOVE the fool. In my latest book it's the Squire, who loves hunting and his bottle. He's not nearly as perfect creation as Professor Trelawney, of course.

Matt-I hear Gaiman does it well--of course Gaiman does everything well... i think it would be a fun challenge.