If not the end of the world, then what?

Last week, Leanne wrote an excellent post about dystopian literature (and you should all go read it, if you haven’t already). This week, however, I take advantage of the combination of our regular “Topical Tuesday” and the start of a brand new year. And not just any year. 2012. The year the Mayans either did or didn’t predict would be the end of the world.

I’d wager, though, that there is a larger following of the theory that the Mayans did predict the end of the world, than it is one believing you got abducted by aliens after having swallowed your morning coffee.)

Now. Despite what the Mayans did or didn’t predict, and despite what we do or don’t interpret is as, I don’t much believe in the end of the world. I hope that 2012 will make a better year than movie. I’m not entirely sure how. But all the same, it is very unlikely it will end the world. 2012 – the movie didn’t end Hollywood, after all. There is still hope.

Hope, yes. But for what? “The world not coming to an end” is a pretty low standard for what we need to have as a minimum demand to make this a successful year. Let me show you an illustrative figure:

Then we are free to fill in several other possible occurrences or events according to their degree of terribleness relative to the end of the world/utopia:

As you can see, there is quite a lot of bleakness that is considered less terrible than "not the end of the world". It is my claim that this is the state we all know and love as "dystopia":

This state of red circle is what we all should fear, more so than our fear for the end of the world. If it ends, it ends. We're out. It is much more scary, in reality, to think of everything that is slightly less terrible than the end of the world. It's not just about chocolate or terrible movies, but also death, war, destruction. Awful things, that - all joking aside - actually will and can happen. Yes, there will be more wars, natural disasters and pointless human suffering. Yes, we might tumble into new financial crises. The Euro might fall. Wall Street might win. Or lose. The Middle East might show us further upheavals still. North Korea might explode, or implode, or plode in other frightful manners. We might actually run out of chocolate.

All in all, though, these are worst-case scenarios. They might not happen at all. And if they do, they probably won't all happen at once. Thus, the chances are we'll still be stuck in the fuzzy area between dystopia and utopia. Everything isn't great, but it's not all bad either. The world hasn't ended. Hitler isn't back. There will be chocolate.

If you're still not convinced, and you still believe the Mayans were right - ponder this: 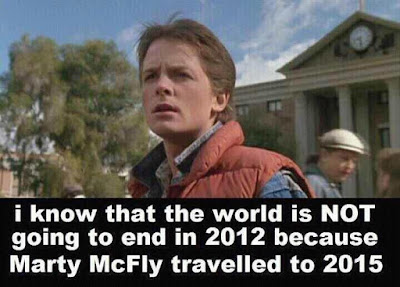 Posted by Cruella Collett at 12:00 PM

Maybe we should just end this world and start a new one. I have a few things I would like to bring over, but probably not too much >:)

Love it! I don't believe in the end unless the universe expands, bends in on itself and it's Big Bang all over again.

I agree with you. Astute scientific analysis of the situation.

Right on there chickelet! And why would the world end on my birthday? How ruuuuuude! I'm kind of in a self-made dystopia right now as I had to go on a strict regime with what I injest after the holiday pigazonga. no chocolate....and my sp bought a bar to share last night and I said, no thank you. urghh.

Since you like Daleks, I'm surprised you only went with Marty McFly on this one.

CAH - point. Though how can we know for sure that we get to bring anything at all? That's the problem...

Chary - another valid point. Besides, as I read on Twitter the other day: if the world is supposed to end in 2012 because the Mayan calendar does, shouldn't it have ended every year according to Western calendars?

Michael - A visitor from the future! I'm honoured! (Also, what are next week's lottery numbers?)

Jan - that WOULD be incredibly rude!

Mark - I like Daleks? I never even knew (I'm a Dr. Who virgin, actually. Well. Define virgin. The Doctor may have gotten to second base once or twice...)