So, pets. I could make up some statistics, but you guys are too smart for that, and I'm too lazy to look up the real numbers, but I'm going to take a guess that about 80% of people have some sort of animal sharing their living space (no, siblings and/or offspring do not actually count as animals, no matter how uncivilized they are...). Cats, dogs, fish, hamsters, birds, hedgehogs... people love their critters.

But do the critters love us back?

I came home from work yesterday after being out from about 7:30 AM till 11:00 PM (save about 20 minutes in between jobs when I popped in), and when I opened my door, there were two kitties waiting for me, purring, mewing, and generally getting underfoot. Hey, I thought, they missed me! What poor lonely little things... and I proceeded to give them large amounts of scritches and pats. Then I got upstairs... and realized their food dish was empty. The little moochers were just hungry! 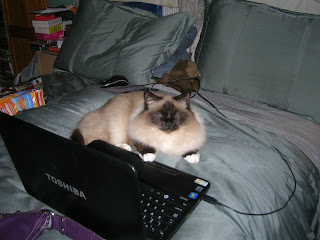 This is Durwen. He doesn't actually know how to use that touchpad.
Okay, so clearly I'm not as important as food in their tiny fuzzy minds. But they care, right? I mean, I've got one on my right arm and one sprawled across my lap as I'm attempting to type this (albeit in a rather round-about {or at least round-a-cat}) manner. Durwen gives rather too many scratchy kitty kisses; Rullie is becoming increasingly difficult to eject from my lap when I need to do things other than scratch behind her ears. They seem to have some sort of time-share worked out for my pillow - half the time, the cat who's on there when I wake up is not the cat who was on there when I fell asleep.

So maybe they do love me, after all. 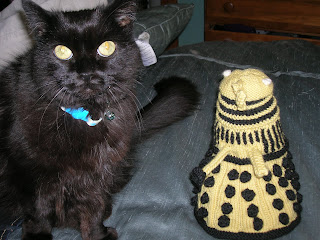 This is Rullie (with the knited Dalek I posted about last year...).

I suppose there's no way to tell, really... so I'm going to declare that pets do love us, based on limited and probably faulty research. But it's hard to say anything else when a large purring furball has taken up residence in your lap and is giving scratchy kisses to every body part in his reach...
Posted by ViolaNut at 12:00 PM

My cats have been extra loving towards me lately. Not that they love me any more than usual, it's just turned very cold. It has it's benefits though...

My cat has actually been a little less antisocial. I think he is being tricksie and plotting my demise.