See that above? That's as far as I got yesterday morning when I came in to cobble something together for this week's post (which should have gone up on Monday, by the way). Erk.

It's been a mad, mad week. It was my birthday last Sunday and I basically celebrated from Friday till Sunday night. Phew! Two nights of vodka-infused fun followed by a round of golf on Sunday afternoon (I've never played in my life, so that was fun *snort*), followed by an evening of Sambuca spritzers... yup, it's fair to say the weekend went by in a haze.

In the midst of all this, we are currently 'doing' the back yard. My back yard is huge - around 20 meters in length and 15 meters across - and up until last Friday it was more an extension to the neighbouring woods than a garden. There was no grass to be seen - heck you couldn't see the patio - because I had about twenty trees growing out there. Not to mention the brambles. And the critters? Never mind creepy crawlies, it was more like lions and tigers and bears, OH MY!

Ok, that was a slight exaggeration, but you know what I mean... 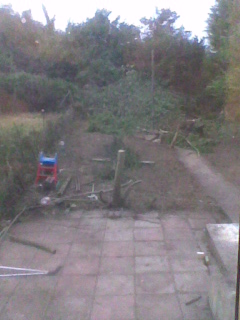 We've only kept one tree - a nice hazelnut - but all the others have been cut down. While I golfed (or pretended to *shifty*) on Sunday, the hubby jet washed the patio. Of course, we couldn't use the kitchen tap for the hose as we have a mixer tap and the thingie (don't know what it's called) wouldn't fit, so hubby fashioned something in the bathroom and had the pipe coming through the window. Yay! Only, as he was busy jet washing, the pipe kind of leaked and flooded the bathroom. Cue pulling up of carpet and mopping up pools of water. Not so 'yay'.


Monday was little better (hence the title of this post). Not content with flooding my bathroom, the Water Fairies decided that my kitchen needed a little extra water too. My daughter was playing with some water bombs with her friends, and filling them up at my kitchen sink. Quite how she managed to soak the entire floor is beyond me, but never mind. She also soaked the worktop and the inside of the cupboard under the sink. I dutifully mopped everything up (amid cursing at the daughter) and thought that was that. But... (you knew this was coming, right?) later that day, as I went to put the washing machine on, disaster struck. I picked up my huge 25 wash box of soap powder (which I'd only used once), and walked across to the machine, and found myself walking through a pile of soap powder. The box had gotten wet during the earlier flooding, you see, hence the bottom fell through. Ugh. Trying to clean up soap powder on a still-damp floor with a still- damp sweeping brush is kind of impossible.

Anyway, most of Monday was spent cleaning up and what-not, and then I had work on Tuesday and Wednesday, followed by helping the hubby in the garden duties, so I clean forgot about blogging. Then fellow Burrower Leanne messaged me with a 'Pssst!' on Wednesday night and I went 'Acccckkk!'. I decided to write my post yesterday, calling it 'Manic Monday', and giving a slightly more twisted version of the week's events to loosely link with our general Thursday theme of 'delusional'. Then, after typing the title and a mere three words, my sister turned up for the day. I'd originally cancelled the weekly visit, and I forgot that I'd cancelled the cancellation... oops.

Anyway, by the time she went home, it was late and my brain was word-free. So here I am, cobbling together a post before I shoot off to work. Never mind 'Manic Monday', it's been a manic week. I'm seriously considering basing a character in a future novel on myself, but I don't think she would be believeable. Unless I was writing a farce.

Email ThisBlogThis!Share to TwitterShare to FacebookShare to Pinterest
Labels: Tara Smith, Who am I? Friday

Hey Dolly - the water sprites are after you! You must make an offering to the Nagas. Just take a bit of your next meal, put it on a very nice pretty blue plate and place it in a window or on the counter. Bow over it and say these words, "I respect the nagas and all water spirits and am sorry if I inadvertently ignored you and your power. Please accept my offering." That ought to do it.
love, jan

Came over from "the other side."
So, is it true you intend to install a swimming pool on your entire main floor, and the early part of the week was a test run? NO? Fancy that.
This has left Bear very confused. I've always thought places with water are such fun. I guess you Humans disagree.
And what happened to your trees? Did they all get sick? Sorry to hear of their departure.

And I thought getting rained on inside was bad... (yes, that happened at work today). I hope everything is dry/fixed/tidied now and STAYS THAT WAY! (Hey, we can hope, right?)

Urgh! Sorry about your string of fiascos, though very good about the several day birthday celebration. I think you should do Jan's ida, plus, in your newly cleared back yard, do a naked dance under the moon *nods*

Getting the tiles perfect is not easy. I've been doing similar stuff this summer.

I bet your garden will be very nice in the end >:)

Jan - Yes! The Water Sprites are indeed after me... *shivers and takes notes on prayer*

Rob Bear - Water is only fun when it goes where it is *supposed* to go. And the trees were nasty trees... unsightly and rickety... they are in Tree Heaven now.

Leanne - Ah - the Water Sprites are after you too then... *candles*

Tami - Yay to several day celebrations! And who knows... a little bit of Naked Dancing may be on the agenda pretty soon. ;p

Cold As Heaven - Our garden has been a forest for years, so it's brilliant that we're finally doing something with it. A nice lawn, patio and vegetable plot is what we're working on for the moment, and then next year we'll pretty it up a bit.

To be honest, I'm pretty excited about finally having a washing line. I've only lived here 15 years... *shifty*