It's All A Game... Apparently. 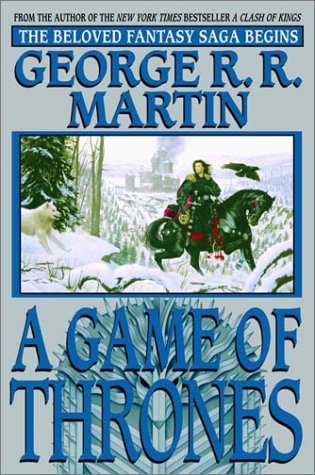 You know, my fellow Burrowers all do so well with their book recommendations. There is always a good selection (usually ones that I haven't read), and their reviews are always interesting. I really fall down with 'Reading Monday' (and 'Writing Wednesday' too, actually) because I just don't have the reading 'experience' that my buddies have. I read, obviously, and I read a lot, but I'm a creature of habit and tend to stick to a core selection of favourites that I have built up over the last twenty years or so. Needless to say, almost all of my dog-eared old friends have already been covered in our weekly 'Reading Monday' slot.

Luckily enough, I recently stumbled onto a new favourite. It's rare that this happens, and I am extra happy because not only have I discovered some new reading material, but it has timed perfectly with today's post.

A couple of months ago I saw a new series being advertised on TV, and fellow Burrower Mari also got wind of it and asked if I was planning on watching it. The series seemed fantasy-based, had a medieval look to it, and promised lots of action and drama. Right up my alley, in fact. And so hubby and I began watching 'Game of Thrones.'

Me being me, I didn't even know that the series was based on a book. In fact, I was around half way through watching the series before I decided to do a bit of Googling (I Google all the time. I'm a nut. Comes from being an excellent procrastinator. *nods*). Anyway, I was delighted to discover that I didn't have to wait until the end of the series (another four or five episodes) to find out what happened next. I was equally delighted that the hubby was also interested in reading the book, and was due a very handy birthday the very same month. *grins*

Of course, my Googling turned up not just one book, but an entire series. Yay! On the downside, the series is ongoing, so there will be a frustrating wait to find out what happens in the end after all. Obviously I bought the hubby the first four books (which I finished reading in just over a week *shifty*), and the fifth is due for release this month (just in time for my birthday, as it happens...). The last two installments will be quite some time in coming, alas, but I suppose I shouldn't be greedy. After all, there are fans who have been reading these books for years, and I've only known about them for a month or so.

So I suppose I should tell you a little bit about the book(s). It's actually quite difficult to describe; I wouldn't strictly call them fantasy, though there are elements that lean that way, granted. It has the general good guys/bad guys sort of theme, there is plenty of action, and there are elements of romance dotted throughout. There are plenty of main characters, with each chapter being told from one person's point of view. Standard fantasy fare for the most part, in fact. But added to these predictable elements are incest, strong language, plenty of sex, and gruesome violence. Not your general Tolkien by any means.

Game of Thrones - the first book of the series - mostly follows Ned Stark and his family as they are uprooted from their home and relocated to King's Landing, the home of Stark's friend, King Robert Baratheon. Robert requires Ned to be the 'King's Hand', a position that is as dangerous as it is powerful. Although Ned is reluctant to leave his home, he agrees to go, and thus sets in motion a chain of events that changes the fate of every member of the Stark family.

The principle antagonists are the Lannister family, of which King Robert's wife is a member. The previous King was murdered fifteen years prior to the beginning of the novel, and the Lannisters played a key part. Power-hungry, often vicious, rarely merciful, the Lannisters are a perfect example of a family who let ambition rule their actions.

The 'Game' in the book's title refers to the ongoing storyline of the struggle to unite under one King. At one point, there are five 'Kings', all determined to to sit on the Iron Throne at King's Landing. Beside Robert and his heir Joffrey (a nasty, evil little toad of a boy), there are Robert's brothers, one of Stark's sons, and the children of the murdered King of fifteen years past.

As I said, each chapter is told from one person's point of view, and while I'm not a huge fan of this particular style, it definitely works with this type of novel. Having so many characters can be dangerous, confusing the reader no end if it isn't done properly. Thankfully, the multiple points of view firmly imprint each character into our heads, and once you are a few chapters in, you know most of the principal characters and have a good idea of what motivates them.

These books are incredible. Unlike anything I've ever read.

Yes, they definitely headed in to my top ten list of favourite books as soon as I'd read them. :)