So mostly I'm a nut, right?
But by day my area of interest is one I feel rather passionate about in a SERIOUS way... it is important stuff that has ripples through a lot of groups of people. It is about quality of life.
My introduction to Disparities
I began looking into graduate schools with the idea that what I really wanted to do was therapy—counseling-- but in Portland the only Counseling Psych degree was from the most expensive university, and at the TIME, I hadn't a clue that an MSW could have gotten me to a counseling license. I thought it had to be Psych. So I applied for the Portland State Psych program... I was initially interested in Industrial and Organizational Psych, only because it was the closest to familiar (I was coming out of advertising and marketing). But it didn't take very long to stumble into Social Psychology... the social reasons we do what we do—the way social stimuli change the way we think. I innately believe that—that we are social creatures. I think it is the branch of psychology that most solidly falls on the NURTURE side of nature versus nurture (though cognitive psych has a lot there too, and that is probably my second favorite strand).
In this study, I began to run across the idea of Disparities—the unequal distribution of... stuff... because of the group people belonged to... the surroundings and economics of ones life...
And then, Fall term my second year I took a Health Psychology course and first ran across the work of David R. Williams, who I believe is now at Harvard, but who I eventually met when I first got to the University of Michigan. He proposed a model of how race, economics, behaviors and care influenced HEALTH.
Talk about a domain where disparities are unfair!
It focused the rest of my coursework and my thesis. I was primarily interested in Disparities in Wellness... why people in privileged groups practiced healthier behaviors, but I did a lot of work in the area.
My first job after grad school was as a program evaluator for the Oregon Health Division. It was a great job. I loved it, as jobs go. I was helping a Tobacco Prevention Team to evaluate the effectiveness of their interventions. (I haven't bought Nabisco or Kraft products since because of their ties to big tobacco). But it didn't take long into it to discover that a city like Portland (in fact anywhere in the US besides major research Universities) had an employment gap for Psychologists. There were grunt jobs and good jobs. But to bridge the gap a person needed a PhD because there were no MIDDLE jobs.
The quest for MIDDLE jobs (and the arrival of my daughter at her 5th birthday vs. Portland Public Schools) prompted me to look for where we might move... Better schools + Mid-level psych research jobs turned up 2 places... Ann Arbor and Chapel Hill. I had several colleagues with UM connections and stereotypes about people in North Carolina making me say Sir, Ma'am, and wear nylons with my skirts... so we headed to Michigan (after an extensive job search and offer)

My first job at the University of Michigan was great for development of awareness in terms of REALITY in a racially diverse place (which Portland really isn't) and was fabulous for my growth as a statistician (I had the BEST mentor EVER for that—Deb Bybee—you're fantastic!)
And the content was interesting... academic achievement... disparities, in a way, but more of a 'tapping racial identity' and helping students use it in their drive to succeed in life.
I worked there for four years, and when the grant ran out, I began looking again... and LUCKED into a perfect position... in fact it was posted wonky, so I didn't find it, but in fact applied for something different with the same group. And they called... gave me the strangely listed job number... and it began... 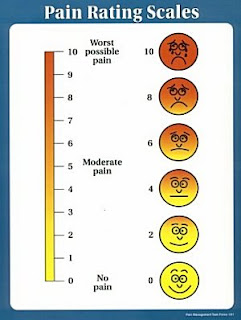 Disparities in PAIN
Did you know that one in two people will experience chronic pain? That at any given time one in three elderly people HAS it. It can result from an injury, a surgery, an illness... (often something like arthritis that builds slowly) or it can result from... no place at all... (seemingly). I, in fact) suffer back pain that I can't pinpoint a cause of (but which is helped by some sleeping props—I know—sounds kinky). I've had a few falls, but no big ones. Honestly I think I am just shaped wrong to sleep on a flat surface. Man, I wish I still had my waterbed.
But the point of the matter is, people who are poor, are minority, are female, or are on the tails of the age spectrum have more trouble and less help for dealing with pain. It impacts their lives more negatively. And the WHYs and HOWs are amazing.
But you know what else? Since I began this job, I've had SO MANY people tell me about their pain issues. You would be BAFFLED to realize how many people you interact with every single day who live with pain. The work in calling it the 6th vital sign is good—progress is being made. But drugs have historically been developed and tested on middle-age white men, and they aren't necessarily ideal for the rest of us. Opioids, for instance, are processed in fat, which women have more of, so we are inclined to have more 'out of it' feelings from them—many of us would rather deal with the PAIN than that.

And Allie, at Hyperbole and a Half TOTALLY improved on the pain chart--you really should swallow your coffee and then go look.
So that's what I do...
Posted by Hart Johnson at 12:00 PM

As one of those chronic pain types, I am all for maximum research in that area, yup yup yup. Actually, wasn't your conference in Glasgow a pain one? (And I was totally going to link H&1/2 if you hadn't... ;-) ).

I work with at-risk, low-income families and a ton of the parents tell me about their issues with chronic pain. It really is a problem.
erica

Leanne-it was--it was the International Association for the Study of Pain--. I've been doing this for about 7 years now.

Erica-It's true--it often really disrupts income and so it's harder to get out of the poverty cycle, too. It becomes circular.