I decided that I would be brutally honest today. Brutally. Honest. I am sure I'm not alone in having two sides, especially on the blog and off of it. Or in front of people who we aren't sure have our back. Or those that do and  have enough of their own misery not to need any more of it. Especially writerly misery, which is of a very certain, and some might say, self-indulgent sort.
This year, with my writing, I've been a Charlie Brown. And the community I've looked to for support has been a Lucy. I've entered various challenges, contests, etc... and always with a cheerful optimistic outlook. But each time I've come up a chump. I've run forward, ready to kick that football, and lo and behold, each and every time it has been snatched away. Oh, don't worry, I'm not seriously deluded. I know that no one is doing this to me. The thing is I've been behind the magician's curtain in many of these instances. I know how the thing works. I've laboured to choose among many bad and several good entries, or sat on boards that decide who is going to get to breath financially for a bit and who will have to keep on keeping on. And I have found it profoundly hard this year to write through rejection. Perhaps it is because I've also been writing through dejection - my dad died, we had a sudden and horrible reversal of fortune, grandchildren woes and on and on.
I'm not going to leave the story there - how mean would that be? But from time to time I realize that my bloggy persona is one cheery broad - a let's just whistle a tune as we walk through the graveyard sort. And I don't feel like trotting that ego-state out today. I will say what has worked for me and continues to - the support of writing pals. In particular, my writing pal Gwen lifts me up when I am down and I in turn do that for her. Not even my dearest guy can get the depth of writing hell but Gwen can. I also know my fellow Burrowers can do the same. We've shared some of the worst and the load has been the lighter for it.
So, if you are writing through rejection and dejection find yourself a writing pal - as soon as ever you can - whether it is in the flesh or on the web - do it. 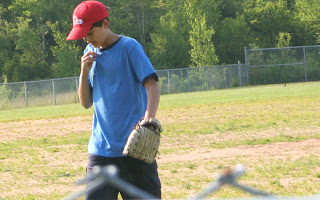 Meanwhile (and it does seem a very mean while) I'm writing up a grant proposal. Like Charlie Brown I will go forward optimistically once again into the fray. Here is a photo of my eldest grandson, contemplating snatching victory from the jaws of defeat...
Posted by Jan Morrison at 1:20 PM

I know exactly what you're talking about, Jan. How I wish we lived closer. Please know I'm standing beside you, my dear, even if I am a continent away.

Oh, Jan-I'm so sorry it's been rough. channel what you can, spread the rest out as far as possible. Sometimes things really stink. I think you've been so great. And while your bloggy persona is often cheery, i think of it more often as STRONG and people are strong through practice. Adversity is what makes us so. (otherwise we get flabby and complacent). Contest are hard because of the piece we have no control over whatsoever--the other entrants. A mediocre work can win if the competition is slim, and a great one can lose if there just was a better one. So never ever take those personally if you've submitted your best effort.

Jan, I'm sending my love through the blog-ether: may your Charlie Brown season result in greater strength, depth, humour and hope. Your writing is a regular source of encouragement to many. Definitely to me. Thank you for being honest and true. Hugs.

You know we are always here for you Jan. If you need a little happy pick me up- let a girl know and we'll send over some laughs!

We're all standing beside you, Jan. Neither do you walk alone. When you take that first step in a new direction, we'll walk with you. In the meantime, I'm sending lots of hugs! Don't give up the good fight!