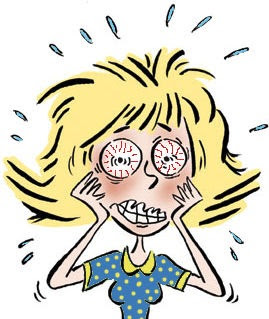 So I tried to think of something that would be relevant to people who, y'know, aren't me (which anyone would agree are in fact a majority in this world of ours), but I'm so stressed out that the only thing I can THINK of is stress. Wanna know why? (Well, if you don't, you can stop reading and go check out Tami's or Natasha's blogs or something...)

It's recital week for my students, for starters, which is always super-stressful. I have to make sure they're all prepared (usually the easy part), get myself prepared (slightly harder), and do all the administrative nonsense that I'm really really REALLY bad at (like scheduling a piano for rehearsal, which used to be super easy 'cause I had one in my room, but they demolished those and put a drama room in instead. Super not fair, man.) And as always, it's the most advanced students who are the least prepared, and I want them all to do well because, hell, achievement is its own reward and all that, but also, who doesn't like genuine applause? And the knowledge that you've earned it? (Also, there are cookies.)

And I've ended up with 6 shifts at the bookstore this week. Or rather, 3 shifts and I'm working 6 days (hardy har har, lemme explain that). See, we're supposed to be moving all the teen books (3 subcategories, hence 3 shifts) around so that new stuff is featured more prominently. I am totally all for this, except for one teensy problem. We don't have enough linear feet of shelving. Meaning that instead of getting to feature all the newest titles, I had to get rid of, oh, 40 or so. Which I hate doing. 'Cause I can't sell them if we send them back to the publisher. And I had a total spaz on that one today, between the whole Mondayness thing, and having to do it almost all myself (I had help for about half an hour, which was awesome), and the pressure of oops-we-were-supposed-to-do-this-ages-ago-but-the-RM-is-coming-so-NOW.

Oh, and the reason I agreed to 6 days this week? I need money (duh, who doesn't). 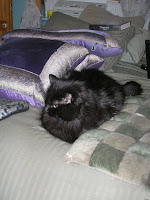 More than usual, I mean. 'Cause my Rullie-cat is sick. She's better than she was, but she'll never be all the way better, and she's not back to normal (like there is any such thing as "normal" with a cat), though she is eating and running and jumping and snuggling (and making it VERY hard to type this post, as she's on my right arm...). Vets are expensive as hell, and when I can't even afford my own health insurance, well, no, kitties do not have health insurance (I did look into it a while back, but Rullie was already too old to qualify). I have also learned that cat-under-the-covers is maybe not all it's cracked up to be (hello, poky feet). That's my girl there on the right - that picture was taken about 5 years ago, she's lots smaller now, unfortunately. She'll be 14 in June if we can keep her going comfortably.

So. That's my pity party. And that's why stress is the only topic I could think of. Hope your week is going better than mine...