See, the beautiful thing about delusions is, you spend a lifetime wondering whether a thing happened or not. But if you don't have to pick a side... real, dream, fantasy... it becomes easier to tell. This is just such a story. I will be honest where I can, but I really don't know all the lines. I did in fact have nightmares during the event... and so reality and dream get fuzzy... and I was a child... that doesn't help...

A Vacation in Summer

I was five. And I was an able swimmer, or so I saw it. I'd passed swimming lessons anyway. And my mom promised me a fun weekend. Lake Pend Oreille. (pronounced Pond o' Ray) A house boat.

A houseboat... my mother had to explain the difference between a house boat and a boathouse. I'd been to boathouses. There was a lot of dark, and sparrow poo, and a certain damp stink. There were narrow planks to stand on while you got in, not as safe as the docks (the odd common feature between the two). Inside were more narrow planks around the boat. It was a thing endured because boat rides were fun and that was where the canoes were stored (canoeing was even more fun than boating -- something I suspect reverses with a Y chromosome), but it wasn't actually pleasant. The boathouse, I mean.

A house boat, on the other hand, was a floating HOUSE! It moved with the waves and you had to step over water from the dock. It was BRILLIANT!

The neighbor who invited us had a daughter my age (my best friend at the time) and a baby. In my head there was another mom with her very young son and either a baby, or... she might have been pregnant—that sounds closer to the truth (if I haven't made this up, I mean).

So there we were, three women in their twenties, four children, the oldest two of whom were five, one of whom might have been irritated that she'd been promised swimming then threatened with seaweed ['oh, no, it's too dangerous here'--as I mentioned, I was an able swimmer] (*cough* this might have been me) on a houseboat... for a week in summer on one of Idaho's most secluded lakes.

Up to this point, I have either stated facts or combining facts from different memories... From this point forward, I suspect I made large chunks of it up.

Dinner that night was made of green with red on top (true--it was zucchini). I wasn't much for vegetables, so I cried until my mom got really mad. My mom didn't get mad often. I forced myself to take a bite, but it just made me cry harder. I couldn't help it. It tasted like green, too. I have mentally blocked the rest of dinner. It must have been tragic. 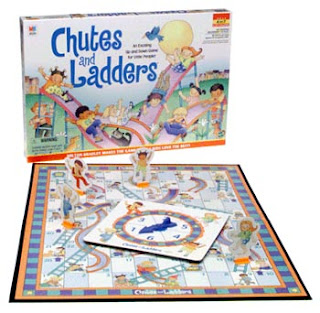 We played a game before bed, Chutes and Ladders, but it was a silly, baby game. When I was at home or with my grandparents we played cards or dice — crazy 8s, gin rummy, blew it — real games. I was intrigued by the one with hippopotamuses, but nobody would let me play. The ice breaker one, either. Years later, I know it was about the noise (and a sleeping baby?). We did try Ants in the Pants, but that was a lot harder than it looked. I was really bad at it, so it was no fun. (I was in my early 30s when I finally sort of got the knack for that -- no clue how kids play.)

And then the storm started.

Power flickered, so the moms found some candles.

They put the other wee one(s?) to bed, or tried. Thunder can be an obstacle that way.

My friend and I cuddled under a blanket. Or argued. Of all my friends I've ever had, she is the one I fought the most with, probably because she was the first who spent a lot of time in my space — living across the street and all... I was an only child, unused to sharing. I think she was the first person I knew who didn't just give in to my will regularly — it was a hard lesson. But it made her my favorite person for a good long time. Somehow, though, my primary memory of that was sitting there spooking each other.


And now for the wild imagination part of the story.

There was a knock at the door and the moms were as scared as we were. My friend and I got shuffled up to bed (yeah, like that was happening).

It was a fugitive.
Or a murderer.
It was a band of horrible people that we had to hide from.

I actually had a nightmare that night, so even the storm may have been a figment of my imagination.

Maybe the knock was someone checking that the three women with their children were okay with no power in the storm — it was the early 70s after all.

Maybe some ranger thought he'd get lucky and instead only got invited in for a bowl of green.

Serves him right, spooking all those moms and children like that.

Any of you have clear memories you think might not actually be true? Only partially true?
Posted by Hart Johnson at 12:00 PM

I went to school near Lake Pend Oreille for a while. North of Sandpoint. It's one of the deepest lakes in the US, so there are probably sea monsters in there.

I have one like that. We had watched Unsolved Mysteries. Well, that night I fell asleep on the couch. I was around 9 or 10 at the time. When I opened my eyes, I saw an alien (like the ones from SIGNS). When I dared to look from the blanket again, it was gone. I still don't know what happened, but it was scary.

I absolutely have memories I am sure are half-imagined from overactive imagination child(me). We went to Hocking Hills cave system in central Ohio a lot when I was a kid, and one of the caves is, for lack of a better description, an above ground cave ... dome... thing... called the Rock House(Google can explain better than I). A drunk man fell off the top of it and died once, but I don't know if we were there when it happened or if I just heard the story so many times that I thought we were. Unfortunately, my parents can't remember either! So I think that memories and stories and imaginations can blur even when they initiate in an adult mind.