Okay, I admit it - in trying to choose a topic for today's post, I've stumbled across far too many of them and don't feel like picking one.  I could go with the three-ring circus that the US election season has spawned, but the whole thing just gets on my nerves.  Life sentence for Amy Bishop, the prof who opened fire at a faculty meeting and, y'know, possibly also murdered her brother when she was a teenager (that's local, even).  But that one disgusts me.  Nepali earthquake?  That's pretty scary, I've got Nepali friends, but they're all over here in the states, so no personal stake there.

But there is one thing happening this week that I can say with reasonable confidence will actually be of interest to my fellow Burrowers (as well as millions of other readers around the globe).  And that's the highly-anticipated release of J. K. Rowling's first adult publication coming up on Thursday. 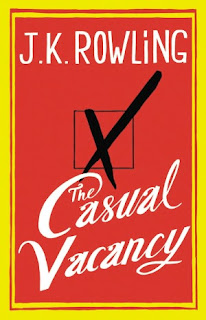 I am massively looking forward to this, I will readily admit it.  I read like a maniac anyway, and, since my teaching day has been cancelled this Thursday due to a school open house using my room, the plan is to get my arse home from the bookstore after my shift and devour it in one enormous gulp.  I'm not expecting the Second Coming (of Harry Potter, I mean, not that whole religious mess) or anything, but I'm very curious to see how she follows up such a generation-defining series.  I've been a hardcore Potterhead for about 13 years now (hell, I'm listening to Stephen Fry's narration of Goblet of Fire right now); this was the door that got me back to the fantasy authors that I'd loved as a kid and led me to discover dozens of new ones.  So even if by some weird twist of fate it sucks, it'll still be money well spent as far as I'm concerned.  I don't care how much money she already has, the amount of enjoyment I've gotten from her work over the years is surely far more than I've paid for it.

Besides, she gives lots of money to MS research.  So she's awesome.

Now, nobody bug me on Thursday!

I never liked Harry P (read the first book with the kids). But JKR writes well. Maybe I'll check out the new book >:)